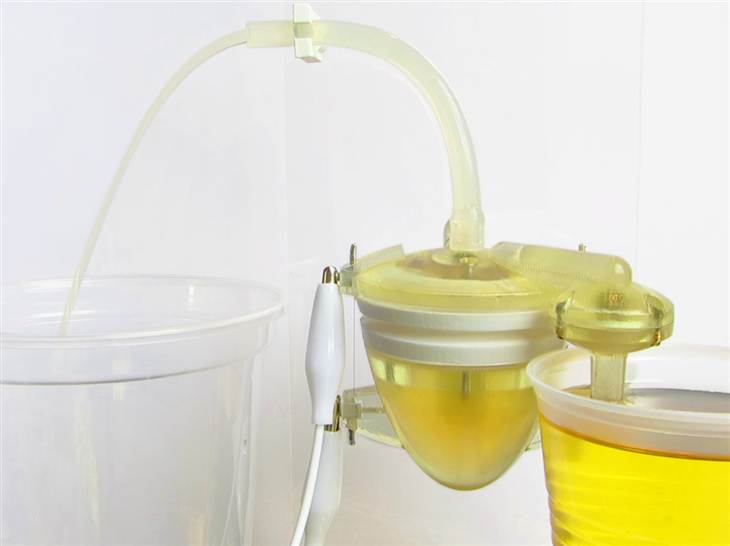 What color is innovation? In this case, yellow. (Image Courtesy www.uwe.ac.uk)

Even with the advancements engineers continuously make, there are still times we scratch our heads and ask: “what’ll they think of next?” This is one of those moments. And note, today is not April Fools Day.

Dr. Yannis Leropoulos, Senior research fellow at the University of the West England is studying how to convert natural waste, such as urine, directly into electricity. Recent tests have allowed Yannis and his colleagues to power up everyday portable devices, such as mobile phones, using this technology. Yannis’ group envisions a day, just a few years in the future, when typical homes will install these devices to convert human urine into electricity to power a family’s portable devices. What’s more, people in the developing world will have a new source of energy to help meet their basic needs.

Microbial fuels cells, according to Yannis, are energy converters, taking one form of energy and converting it to another. Inside the microbial fuel cell live microorganisms typically found in sediment, soil and in our stomachs: they take the fuel in urine and break it down by eating it, producing electrons and a flow of energy.

Yannis says urine is an exceptionally good source of food for these microorganisms. The following graphic is a basic outline of a microbial fuel cell: The Process of Turning Pee into Power

Yannis’ group has built a “cascading microbial fuel cells system” pictured below. Processing begins as urine enters a microbial fuel cell filled with microogranisms. The urine passes through three sets of  three fuel cells in succession and, as urine is digested, waste drains out of the system and into holding bottles. This setup of nine microbial fuel cells produces enough electricity to power the cell phone Yannis is holding in the picture. The project has been funded by the Engineering and Physical Sciences Research Council (EPSRC), the Technology Strategy Board and the Bill and Melinda Gates Foundation.

Others Around The World Working on Same or Similar Technology

Since 2010, Chinese researchers Shanwen Tao and Rong Lan, working at the Heriot-Watt School of Engineering and Physical Sciences in Edinburgh, Scotland, recently hit on the idea of using urine or “carbamide” as an energy resource after recalling seeing it used as fertilizer when they were growing up in eastern China.

Tao and Lan are now generating electricity and clean water using a new fuel cell design. Fuel cells normally rely on flammable hydrogen gas or methane burned to generate electricity. Urea, an organic chemical compound found in urine, is created when the body metabolizes protein. As with any alternative fuel, it must be abundant, nonpolluting, portable and contain high amounts of nitrogen and in this matter, pee fits the bill.

A prototype called the “Carbamide Power System,” currently in the prototype stage, converts urine from animals and humans into CO2, nitrogen and water while producing electricity. As a result, Tao and Lan received a $200,000 grant to develop the technology further. The first likely applications will be for island and desert locations and in submarines or spaceships. Eventually, municipalities around the world could incorporate this new system to help reduce high costs currently associated with removing urea from wastewater.

A number of research teams around the world are involved in the same type of “pee conversion” process. E3 Technologies, LLC, based in Athens, Ohio, is developing “GreenBox” using biomolecular and chemical engineering techniques for the same type of conversion. According to CEO Kent Shields, “It is a synergistic technology: By reducing emissions, you also get a free, clean source of energy. As the clean energy economy develops, this could provide an attractive energy source.”

The following video shows the building and use of a “greenbox”: