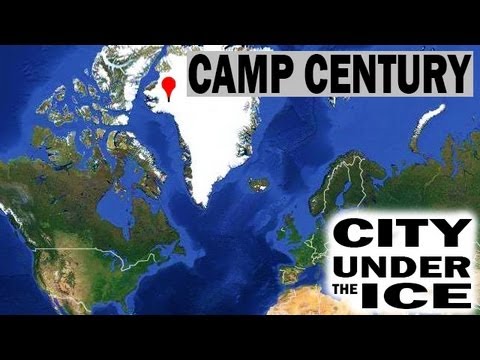 Camp Century was a nuclear powered research center built by the US Army Corps of Engineers under the icy surface of Greenland. The large island Greenland is almost entirely frozen and inhospitable.

This climatically hostile base became operational in 1959 until unsteady ice conditions within the ice sheet caused the project to be canceled in 1966.

It was officially built to conduct scientific research but the real reason was apparently to test out the feasibility of burying nuclear missiles below the ice…close enough to strike targets within Russia.

This top secret city used to deploy up to 600 nuclear missiles under the cover of Greenland’s ice sheet, able to quickly strike the USSR in case of nuclear war. It is worth noting that this was in the era before long-range ICBMs (intercontinental ballistic missiles) and when the US feared that the USSR could gain the upper hand.

To power this secret city, the US built a small, portable nuclear reactor. To support its population of around 200 inhabitants, the water was supplied by melting glaciers and tested for germs. It had number of tunnels, a hospital, a shop, a theater, a church and even dormitories and laboratories.

When geologists working at Camp Century found that the glacier was moving much faster than anticipated, it was closed in 1966 and the nuclear reactor removed. Its steel frames and structures were crushed by the enormous power of the moving ice.

Documentary made on this Top Secret Underground Arctic City in Greenland: