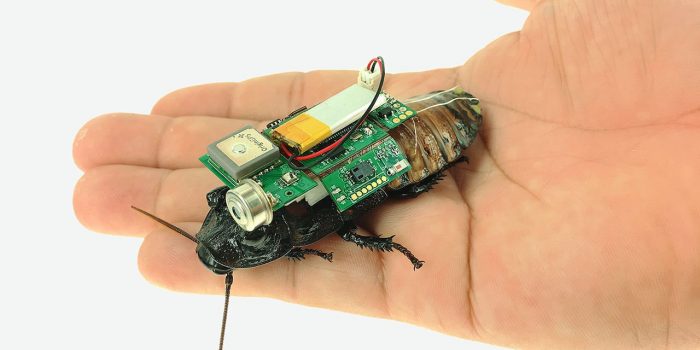 Worldwide many people have a fear of insects. But these creepy insects can also work as lifesavers. Now a group of researchers has developed a robotized roach to find survivors in collapsed buildings.

Researchers chose these insects because they can reach the spots where others cannot. They could reach the toughest spots which are hard to access because of the debris and the rubble.

Dr. Hirotaka Sato from Nanyang Technological University in Singapore has been working on this concept for 15 years. For this, researchers worked on Madagascan hissing cockroaches and ive beetles. They made these cockroaches into autonomous agents for searching through rubble for signs of life.

These insects are not remote-controlled but are controlled by algorithms that can detect human life or other animals. Their backpacks have sensors and a communication chip. They also have a carbon dioxide sensor and a motion sensor along with an infrared camera.

So these well-equipped roaches could be released through the rubble. Because of their tiny frame they can reach hard-to-reach places. Their backpacks are programmed to look for movement, body heat, and elevated CO2 levels. Then artificial intelligence helps in deciding whether the presence of a person is detected, before alerting the rescuer.

Researchers conducted tests in a fake disaster area. In that experiment, these roaches were able to successfully recognize people 87 percent of the time.