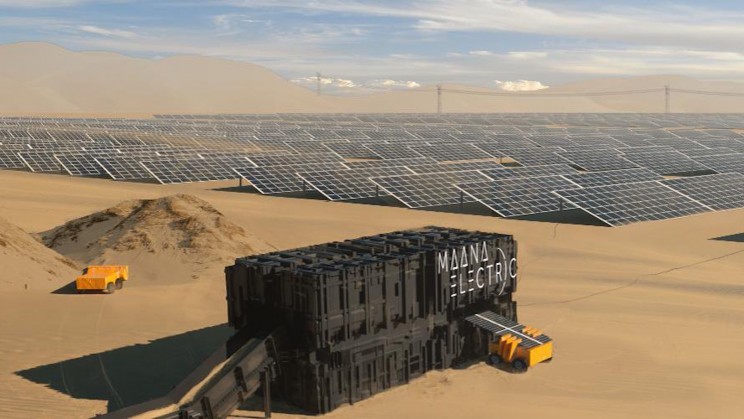 It all starts with the raw material, which is sand for most solar panels that are made of silicon. But a solar panel typically requires around four years to offset the CO2 produced in the production process.

No Carbon footprint… too good to be true!

Maana has created shipping container-like boxes that can produce solar panels using only sand and own produced electricity as inputs. The panels are produced with 0 emissions. The box is called TerraBox, it’s like a fully automated factory that can be transported to deserts to help produce renewable energy. There won’t be any need for large-scale transportation of solar panels, reducing cost, breakage, and emissions from transport.

Maana’s Terrabox can significantly reduce the cost of solar panels. As a result, solar projects will become economically viable leading to a faster transition to renewable energy.

Solar panels are made from thinly cut wafers of crystalline silicon, produced by purifying metallurgical grade silica or sand. However, crystalline silicon PV cells are the most common solar cells used in solar panels. These represent more than 85% of the world’s Photovoltaic (PV) Cell market.

However, if all goes well, Maana plans to send their Terraboxes to the space to take care of the energy needs of future human settlements.