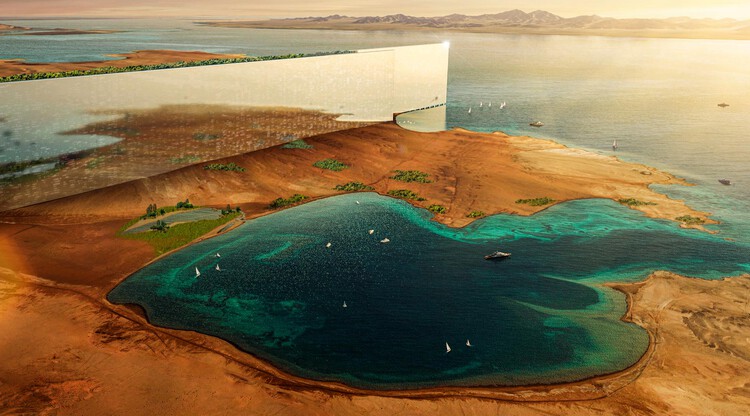 Saudi Arabian authorities have revealed their ambitious plans to build a linear city. They plan to construct a 170-kilometer (105-mile) long mirrored skyscraper. Named ‘The Line’, it will be built near the Red Sea in northwest Saudi Arabia.

The building would be taller than the Empire State Building in New York City, USA, and would have a width of just 200 m (656 ft). Moreover, it will be the tallest structure ever that will run sideways for 120km. For giving a unique appearance, it will be completely clad in mirrored facades.

The line is expected to accommodate nine million people

For traveling within the city there will be a high-speed underground rail line. It would take you from one end of the city to the other in just 20 minutes.

Designs of the Line were unveiled by HRH Crown Prince Mohammed bin Salman. This futuristic city will be built on an area of 13 sq miles (34 sq km). Moreover, it will be a zero-carbon city because 100% of energy requirements will be met by renewable sources.

“The Line will eventually accommodate 9 million residents and will be built on a footprint of 34 square kilometers [13 sq miles], which is unheard of when compared to other cities of similar capacity,” explained the press release. “This in turn will reduce the infrastructure footprint and create never-before-seen efficiencies in city functions. Its ideal climate all year round will ensure that residents can enjoy surrounding nature when walking around.”

“The Line offers a new approach to urban design: The idea of layering city functions vertically while giving people the possibility of moving seamlessly in three dimensions (up, down or across) to access them is a concept referred to as Zero Gravity Urbanism. Different from just tall buildings, this concept layers public parks and pedestrian areas, schools, homes and places for work, so that one can move effortlessly to reach all daily needs within five minutes.”