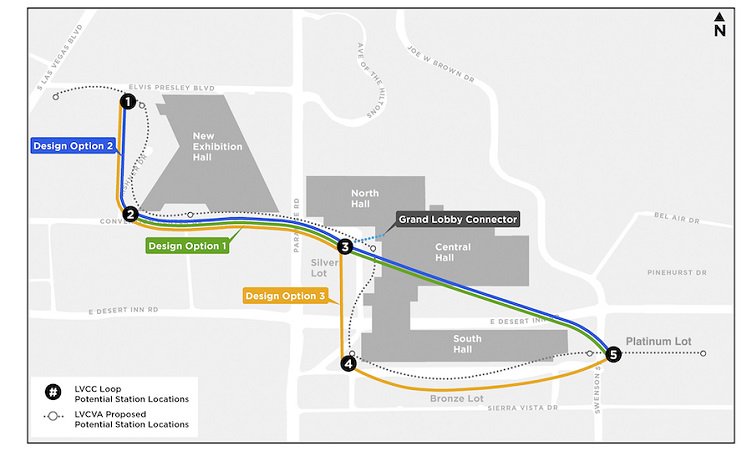 The Boring Company has been assigned a contract by the city of Las Vegas that asks it to design and build a high-speed loop for the local Convention Center. The loop’s purpose will be to shuttle visitors of the LVCC around, while there are also expansion plans that may take its reach to the famous Las Vegas Strip, the Raiders stadium, and even the McCarran Airport. The first focus of the project will be to cover the LVCC with five stations however, which are expected to be built by 2021.

The shuttles will be Tesla Model X and Model 3 vehicles with a strengthened and lengthened chassis that will provide enough room for 15 passengers (sitting and standing). The max speed that the shuttles are planned to reach is 155 mph (250 km/h), so this will be pretty high-speed. The proposed loop system presents three loop design options that are relatively straight, so these speeds will be achievable with absolute safety of course.

If it all works as planned and the expansions are also realized, the Las Vegas loop will then set course for the next destination which will be the city of Los Angeles. The Boring Company maintains three boring tunnel projects there already, although their progress has been halted due to lawsuits and other factors. Elon Musk’s company is also occupied in the development of a Baltimore-Washington loop, as well as a large-scale project that will link downtown Chicago to the O’Hare Airport.

The Las Vegas loop is going to be the one that will sport the higher speeds, at least as far as the planning reveals right now. This makes it particularly interesting, and especially for the standing passengers of the shuttles and how much they will enjoy their trip around LVCC. Hopefully, the construction will go as planned and we will know in 2021.