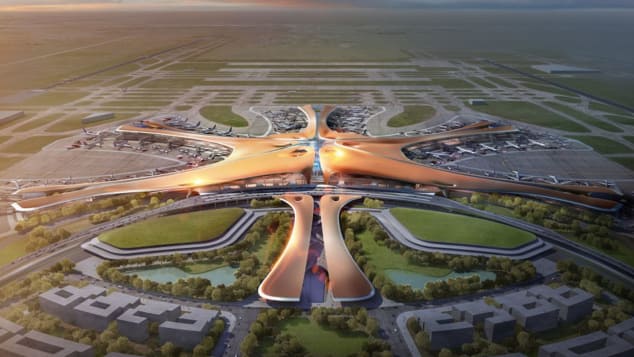 The Beijing Daxing International Airport, also known as “Starfish”, has opened its doors and travelers started flowing in and getting amazed by its sheer size and beauty.

The record-breaking element in its construction is actually the terminal building, which covers an area of more than a million square meters (11 million square feet). The cost for the construction of this massive-scale project was $11 billion, and it took five years to complete.

The Daxing International Airport was designed to be able to handle 72 million passengers, 2 millions of cargo and mail, and 620000 aircraft movements yearly, until 2025. From then on, the target will be heightened to 100 million travelers every year. Right now, its terminals are populated by 14 different airline companies, taking people to numerous destinations, both within the country and around the globe.

Besides the humongous size, there’s also the architecture that makes Daxing so admirable and breathtaking. It’s design and development was undertaken by Zaha Hadid Architects and ADP Ingénierie, a renown airport engineering firm. The characteristic star shape creates a novel space for the multi-floor central hub that hosts the mega-terminal, and all of its accompanying infrastructure. This shape also gives it a unique practicality, as the longest distance between any two gates in Daxing is only 600 meters.

This is an amazing feat, considering that the airport has 78 gates that lead to six runways. To allow the sunlight to pass through the upper storeys and down to the lower parts of the mega-structure, architects used glass windows and even glass bridges. The roof features eight thousand glass roof windows which absorb 60% of the sunlight heat so as to keep things cooler inside the building.

As for the safety, approximately 1000 anti-seismic isolation bearings were used in the concrete slabs of the ground level to keep the terminal intact no matter how intense the shaking may get. The designers claim that the terminal can withstand earthquakes of up to 8.0 Richter.