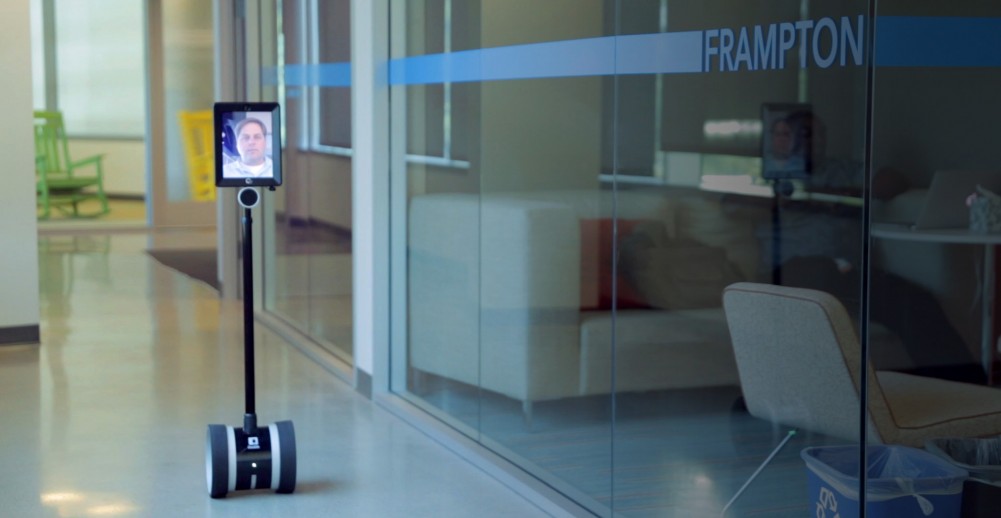 Mobile telebots and telepresence systems are now being offered by a variety of manufacturers and suppliers including Double Robotics, and the products are being used at companies such as LinkedIn to improve productivity (see video below).

Double Robotics offers the “work anywhere” Double 2 robot. The Double 2 can be driven from anywhere in the world using Mac, PC/Windows, iPad or iPhone along with Chrome or Firefox browsers. Communication with Double 2 uses 128-bit AES end-to-end encryption to protect and secure audio and video content.

Current prices for advanced telepresence robots ranges from $5,000 to $7,000, and live demos are available online so take a telebot for a spin in a far off location!

The following graphic from Double Robotics shows the configuration and specifications of the Double 2. Following are additional features from the Double Robotics website:

Lateral Stability Control is a shock absorption mechanism built in the base to maintain lateral stability while traversing common obstacles in an office or classroom setting, such as cords, bumps, or a change in threshold.

Power Drive enables the robot to go up to 80% faster than normal driving speed, when the driver needs to go a long distance. Simply hold down the Shift key on your keyboard while driving with the arrow keys.

Camera Kit includes a 150 degree wide-angle lens that increases the field of view by 70% on both the left and right sides! It’s a 5 megapixel camera, so you can take much higher resolution photos to see the details.

Camera Kit enables the Always-on Floor View for increased spatial awareness and no need to take time switching between camera views. Adaptive HD is a new technique that we’ve developed to favor smooth video when moving and higher resolution (up to HD!) when you’re still.

Double 2 is available to ship immediately! We anticipate a high demand, so check the latest shipping lead time during checkout. Camera Kit shipping date is TBD.

The following terms and concepts are related to telepresence robots and have been covered in articles in IndustryTap  or will be in the future.