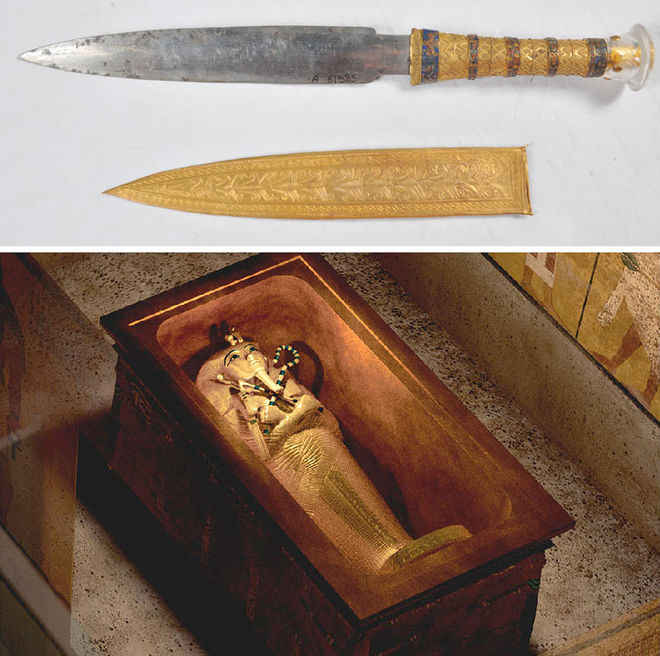 Mystical Egyptian King Tutankhamun died at the young age of 19 after a 10-year reign. King Tut’s tomb was discovered intact in Egypt’s Valley of the Kings in 1922.

Ever since the discovery of his tomb, archaeologists and historians have been fascinated by King Tut’s mummified remains and the mysterious objects found in the tomb.

Pharaoh’s dagger does not match iron found on Earth

An iron dagger along with a gold blade found in the teenage king’s tomb always puzzled scientists because smelted iron was rarely used in the Bronze Age and also because the dagger’s metal had not rusted since the king was mummified more than 3,300 years ago.

The metal for the dagger came from a fallen meteorite

But now, research suggests that the iron dagger buried with King Tut was made of meteorite. Researchers from Italy and the Egyptian Museum used X-ray fluorescence spectrometry to determine the material used for the knife. They discovered iron with high nickel content as well as cobalt, which strongly suggests its meteoritic origin.

Researchers compared the composition with a meteor found in the seaport city of Marsa Matruh, 150 miles west of Alexandria (the second largest city in Egypt). They found the similar composition in this meteorite, confirming that the iron in the dagger blade most likely came from a meteorite.