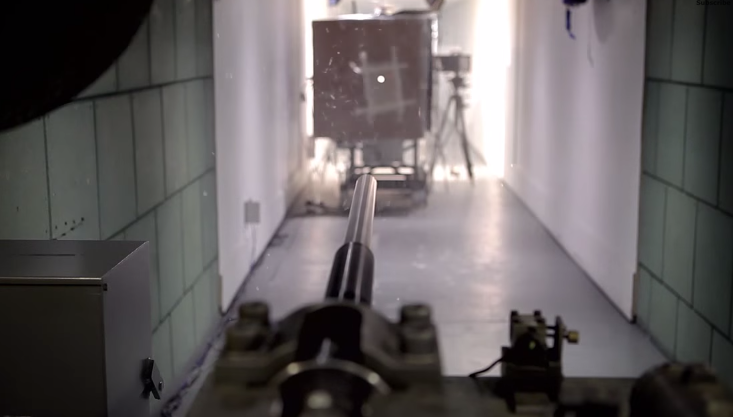 Traveling at 1,000 miles per hour is difficult in its own right, not to mention when you have to factor in debris such as a rock flying up and hitting the vehicle or a wheel blowing out.

In order to protect their driver and ensure the safety of the cabin and ballistics panel, the team at BLOODHOUND SSC decided to fire a projectile at the panel with 29KJ of energy, the equivalent of a 2,000 mph cricket ball!

The ballistics panel, comprised of millions of woven glass fibers, performed extremely well in the test, which can be seen in the video below.

Here is a full explanation of the test from BLOODHOUND SSC’s YouTube Channel:

At 1,000mph, BLOODHOUND Supersonic Car’s solid aluminium wheels will be spinning at 10,200 rpm, that’s rotating at 170 times per second, generating a staggering 50,000 radial g at the rim. A 1kg bag of sugar at the centre of the wheel would weigh 50 tonnes, the same as a fully loaded artic lorry at the rim.

Whilst the wheels have been forged using a 3,600 tonne hot press and a 20,000 cold press to ensure the metals internal grain structure radiates out like the spokes of a wheel, they could still fail if they hit stone hidden beneath the desert surface.

If a piece of the wheel were to fly off, or indeed a stone lying just under the surface of the desert were to flick up, they could penetrate the incredibly strong carbon composite cockpit.

To combat this, Morgan Advanced Materials have developed a lightweight composite ballistic panel, containing millions of woven glass fibres to soak up the energy of projectiles that hit them. The panels have been fitted to both sides of the carbon fibre cockpit to protect the driver, Andy Green.

How do the team know they are up to the job? Morgan Advanced Materials fired a projectile at them with 29KJ of energy, the equivalent of a 2000 mph cricket ball!