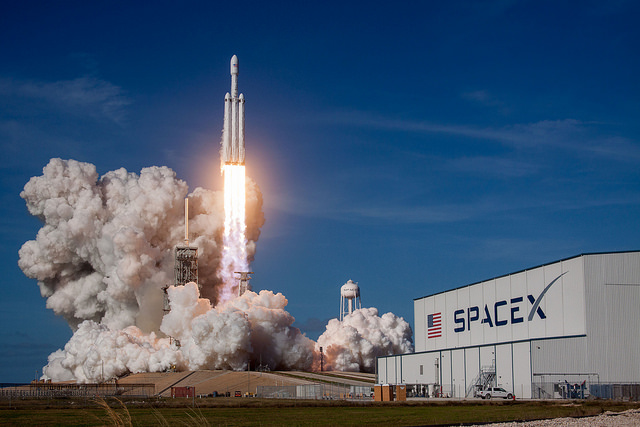 Image courtesy of SpaceX on flickr.com/spacex

The test firing was a prelude to the big show on Feb. 6

Once the Falcon Heavy successfully blasts off on an unmanned mission to prove it can fly, it can start sending satellites and other payloads into orbit.

The 70-meter-tall Falcon Heavy is designed to put up to a maximum of 64 tons into low-Earth orbit. The world’s most powerful rocket

What is being sent into space?

Elon Musk has decided to launch his own electric sports car — a cherry red Tesla Roadster — to simulate a payload on the first Falcon Heavy flight.

On being asked why he wanted to throw away a $100,000 car, Musk, who is also the CEO of Tesla, replied, “I love the thought of a car drifting apparently endlessly through space and perhaps being discovered by an alien race millions of years in the future.” How much will it cost?

SpaceX advertises a price tag of $90 million for a Heavy launch. It’s a bargain in comparison to its rival the Delta IV Heavy, which is built by United Launch Alliance, costs more than $400 million per launch.

How to watch the launch?

You can watch the liftoff directly from SpaceX’s live webcast here.

You can also buy a launch viewing ticket at the Kennedy Space Center Visitor’s Complex in Cape Canaveral.