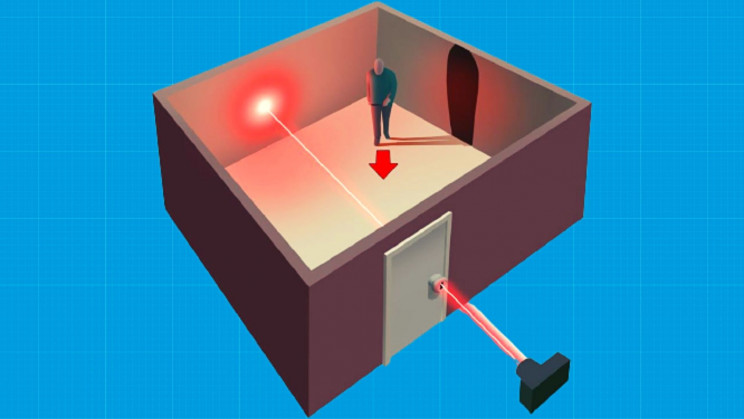 Researchers from the Stanford Computational Imaging Lab have developed a novel method called non-line-of-sight (NLOS) imaging, or keyhole imaging. This innovation will allow you to scan an entire room by peering through a keyhole. So, a single point of laser light entering a room would allow you to see every physical object in the room.

NLOS imaging is not a new concept

This established technique was however refined to create cameras that can capture objects lying beyond the field of view. Earlier this technique used flat surfaces, like walls or floors that happened to be in line-of-sight with the hidden object and the camera.

The light pulses from the camera (typically lasers) bounce off of the flat surface toward the hidden object, and then it makes its way back to the camera’s sensors.

Collected information was further analyzed by algorithms for evaluating the duration elapsed between sending and receiving the signal. This helped them generate an image of what the camera can’t see.

The resultant wasn’t a high-resolution capture , but details are sufficiently abundant to classify the imaged object.

This (NLOS) imaging technique could be used in many applications like autonomous car navigation, improving safety, and obstacle avoidance, etc. But the technique has a big limitation. It requires a large reflective surface where light reflections returning from a hidden object can be measured.

A new laser technique could turn a keyhole into a peephole

The latest keyhole imaging technique however requires only a tiny hole to see what’s inside a closed room. In this technique, light bounces off a wall, then some object in the room, then again off the wall before returning through the keyhole to a camera.

The images generated by this latest technique are even lower in quality than earlier NLOS techniques. However, it provides enough detail for users to guess the shape and size of the obstructed object.