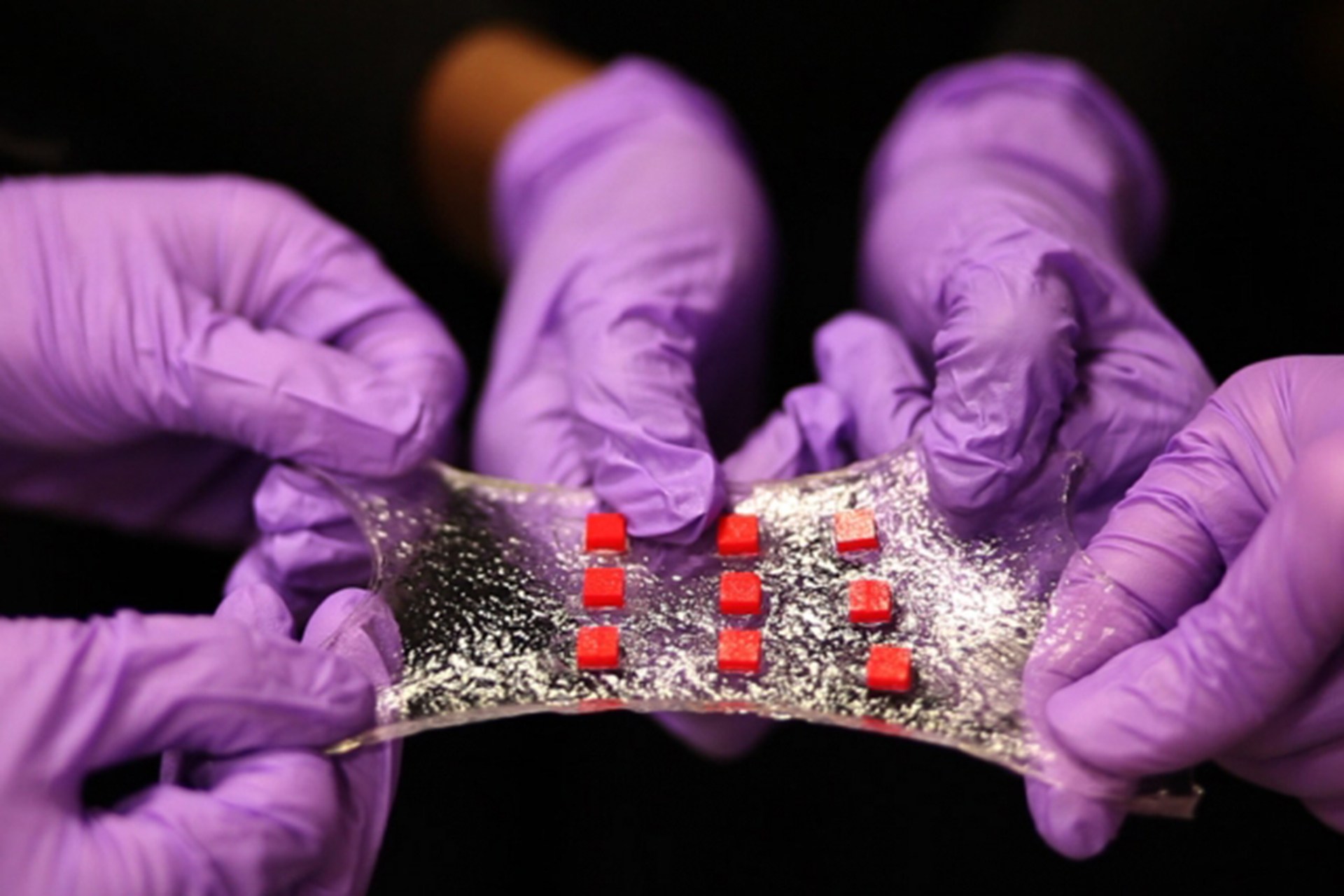 Scientists at MIT have managed to design a next generation, high-tech band aid that they are calling the “Band Aid of the Future.” It is a sticky band, constructed with a stretchable hydrogel substance, which incorporates temperature sensors, LED lights, and drug conveyance systems. The band aid is designed to respond to changes in body temperature that can drive the flow of medicine into the body through the delivery channels.

The LED lights on the band aid light up, as a warning signal, when the medicine is at a low level. Scientists at MIT claim that the rubber-like matter allows the band aid to be placed on any surface or body part as it is flexible and adaptable. Difficult areas like elbows, knees and other joints, which respond poorly to regular bandages, can be covered in this innovative hydrogel element, which is designed to keep the electronic chips intact while adapting to the skin.

The dressing is embedded with electronic devices, like conductive wires, LED light circuits, semiconductor chips, and temperature sensors. Xuanhe Zhao, the lead scientist on the study, said, “Electronics are usually hard and dry, but the human body is soft and wet. These two systems have drastically different properties. If you want to put electronics in close contact with the human body for applications such as health care monitoring and drug delivery, it is highly desirable to make the electronic devices soft and stretchable to fit the environment of the human body. That’s the motivation for stretchable hydrogel electronics.” The next generation hydrogel substance was initially constructed to be fused with hard metal surfaces, like gold, aluminum, and silver. Although they are generally brittle and non-springy, the hydrogels used in these bandages are equipped with a titanium wire network, which enables the band to develop resilient, rubber-like properties. Due to the durability and strength of titanium wires, these bands can be stretched a number of times without causing damage to the internal structure or its electronic conductivity.

The production of constant conductivity allows the band aid to perform as a “smart dressing.” The temperature control and the medicine delivery channels remain unaffected, even when the dressing is stretched to its limits. The drug administration and the temperature variables can be monitored via an electronic circuit, and the team of scientists hopes that these properties can be utilized to treat burns successfully.

The long-term objective of this new innovation is to insert microscopic electronic delivery systems into the human body, such as drug delivery probes, neural probes, and glucose sensors. Zhao explained the numerous future applications of the reformed hydrogel band aid by saying, “The brain is a bowl of Jell-O. Currently, researchers are trying different soft materials to achieve long-term biocompatibility of neural devices. With collaborators, we are proposing to use robust hydrogel as an ideal material for neural devices, because the hydrogel can be designed to possess similar mechanical and physiological properties as the brain.”