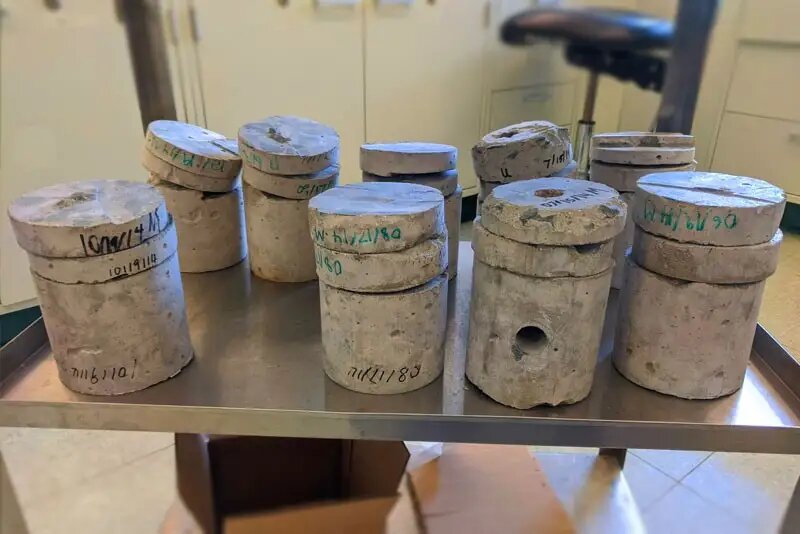 Concrete may not seem like a particularly hospitable environment for life, but bacteria do live inside it. Recently researchers from the University of Delaware found Proteobacteria, Firmicutes, and Actinobacteria thriving in concrete.

Julie Maresca, the microbiologist from the University of Delaware, said, “There was really nothing at all known about microbes in concrete,” “It’s the most commonly used building material in the world, but we just don’t know anything about what lives in there.”

Now researchers are working to find out how they get there, and how they stubbornly persist within. They are also trying to find out ways to use them in the future for repairing defects.

For the study, the team used 40 concrete cylinder samples. Each of these cylinders is about the size of a liter (34 oz) bottle. Two groups were made. One group used a standard concrete mix that’s prone to an alkali-silica reaction (ASR) that degrades the concrete. But the other one is made with fly ash that’s resistant to it. For about two years, these were left on a rooftop. However, their DNA analysis was taken every six weeks.

In the DNA analysis of the samples, the most common bacteria discovered by the researchers were Proteobacteria, Firmicutes, and Actinobacteria. They concluded that about 50 to 60% of the bacteria probably came from gravel and other raw materials.

Researchers also discovered bacteria diversity dropped as time passed. But, some types of bacteria experienced a bit of an uptick with the change of season.

“If there’s nothing to eat, some of them can form spores or form a dormant cell type and do nothing until it rains, then eat as much as they can and go dormant again.”

Everything You Ever Wanted to Know About Slab Resolvers But Were Afraid to Ask
Overview of Everything New for the 2014 Formula One Season
A 9,000-Pound Tank That’s Faster Than a Ferrari