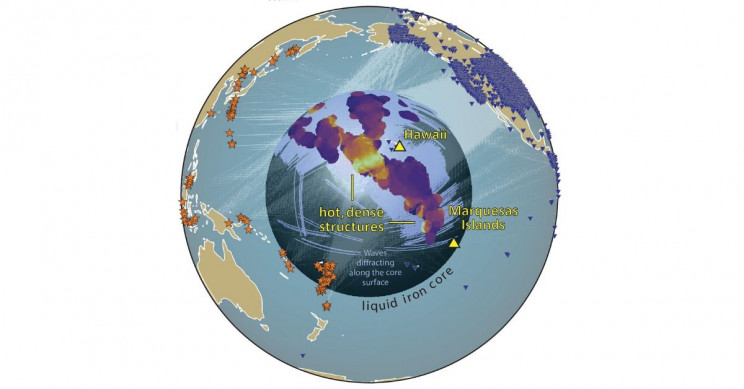 We are planning to establish human settlements on Mars and moon, but are still unaware of many facts regarding our own planet.

Vedran Lekić, one of the researcher, said that the “anomalous structures at the core-mantle boundary are much more widespread than previously thought.”

Researchers examined data from 7000 recorded earthquakes, including major earthquakes, recorded in the Pacific Ocean region between 1990 and 2018. They used seismograms from these earthquakes and put them into a machine learning algorithm called Sequencer. This way, scientists were able to map the inside of the Earth in unprecedented detail.

Researchers discovered the strongest post cursor signals beneath the Marquesas and Hawai’i’s islands. This implies the existence of two “mega-ULVZs” zones that span around 1,000 kilometers (621 miles) or more.  However the team isn’t certain about the composition of the structures and their exact layout.

Lekić said, “We were surprised to find such a big feature beneath the Marquesas Islands that we didn’t even know existed before,” “This is really exciting, because it shows how the Sequencer algorithm can help us to contextualize seismogram data across the globe in a way we couldn’t before.”

Indestructible Hockey Puck Part 2: Facing the Never-Ending Fire Burn of Thermite
Why Are You Losing Business to Your Competitors? How to Manage Your Customer Relationships – Part 2