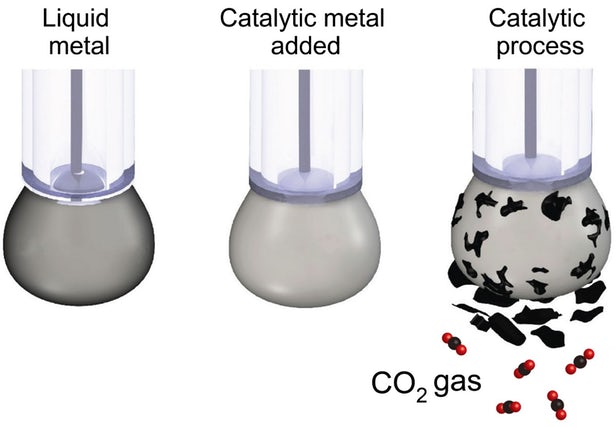 A research team led by Royal Melbourne Institute of Technology University (RMIT) in Australia has developed a new technique to convert CO2 back into solid coal.

It is a big breakthrough, which can help in having control on the release of green house gases which is a main culprit of climate change we all are facing.

Researchers did this miracle by using a liquid metal electrolysis method which efficiently converts CO2 from a gas into solid particles of carbon.

Current technologies used for checking the issue of large scale emissions from fossil fuel power plants involves compressing CO2 into a liquid form and pumping it into sealed reservoirs underground. However the concerns of economic viability and environmental concerns about possible leaks from the storage sites remain.

Researchers in Australia were working on developing a technology that would remove that risk. Now this innovative technique developed by them results in solid flakes of carbon, similar to coal, which they hope are easier to store safely.

RMIT researcher Dr Torben Daeneke said: “While we can’t literally turn back time, turning carbon dioxide back into coal and burying it back in the ground is a bit like rewinding the emissions clock.”

“To date, CO2 has only been converted into a solid at extremely high temperatures, making it industrially unviable.

“By using liquid metals as a catalyst, we’ve shown it’s possible to turn the gas back into carbon at room temperature, in a process that’s efficient and scalable.

“While more research needs to be done, it’s a crucial first step to delivering solid storage of carbon.”

Lead author, Dr Dorna Esrafilzadeh said, “A side benefit of the process is that the carbon can hold electrical charge, becoming a supercapacitor, so it could potentially be used as a component in future vehicles,” she said.

“The process also produces synthetic fuel as a by-product, which could also have industrial applications.”