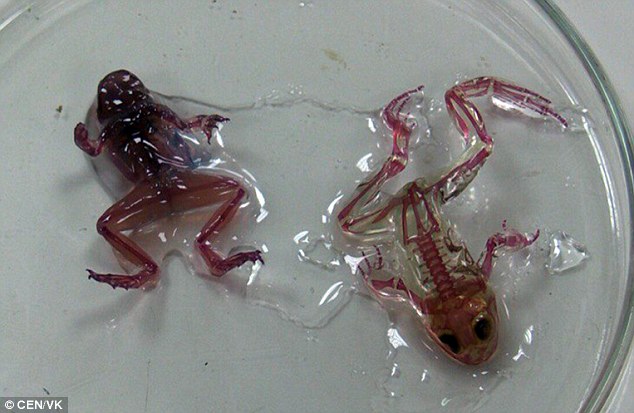 Scientists have discovered scary looking frogs with transparent skin, through which all of their internal organs, skeleton, and even their beating hearts are clearly visible. Researchers have captured a total of 60 mutant frogs near the town of Krasnouralsk in central Russia’s Tyumen Oblast region.

Some of these strange looking amphibians even have an extra toe on each limb or abnormal growths on their shoulders.

Vladimir Vershinin, head of zoology at the Ural Federal District University’s Institute of Natural Sciences, said, “Their eyes are absolutely black and the internal organs are visible through the belly of the animal. You can literally see the heart beating.” He added, “Frog eggs do not have their own membrane to protect them from a polluted environment.”

As per Russian scientists, environmental pollution is the culprit behind these nightmarish ‘mutant frogs’

Mr. Vershinin feels that most probably this is all the effects of environmental pollution caused by a nearby abandoned chemical plant. He explained that the hazardous chemicals leaked from storage tanks have created bright orange lakes which could have caused these amphibians to mutate.