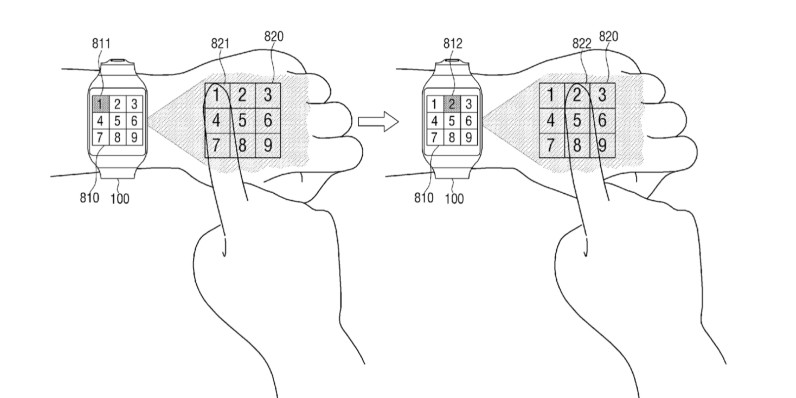 One of the biggest shortcomings of smartwatches has been tiny display screens. The Korean tech giant, Samsung, is working on a smartwatch that will actually make your hand part of the display. It has recently filed a patent with the US Patent and Trademark Office (USPTO) regarding a wearable smartwatch that can project a user interface on the back of your hand.

Samsung’s smartwatch patent filing describes a device that can identify the shape of the hand, and then project a user interface on the user’s hand using a small projector. Afterwards, the smartwatch can detect how your other hand interacts with the interface using a built-in camera.

Details of the Smartwatch Patent

Diagrams of the patented smartwatch device show a UI that is projected on the back of a user’s hand. The image can be projected onto the fingers, arms, and even on a wall that further extend viewing size of the image.

Samsung’s patented smartwatch has a tiny embedded projector that is said to display the UI in predefined spaces. The projector maps out the shape of the predefined space and then projects the UI in a way that it will fit the boundaries of that space. It can also take input from the user’s hand based on direct input on the projected UI. You can interact with the projected UI to perform different commands. These include dialing numbers, sending text messages, viewing information relating to searches, and much more. The projected image can show a number pad, a keyboard, or display advanced functions of an application installed in the smartwatch. You can also use your fingers to play games, watch videos, and even write or draw on the UI screen projected on the back of your hand. None of this is possible with the smartwatches currently on the market.

Samsung’s patent also provides details of an interactive projector on a headset on a virtual reality (VR) headset device. The VR device with the embedded projector can be used as an input in augmented reality applications. It can also track the movement of fingers and understand hand gestures. Additionally, the VR headset device contains an omnidirectional lens that can capture images of the pre-defined spaces on which the image is projected. Other devices that have been described in the latest patent filing include a wearable headband, wearable ring, and a wearable belt that uses the same technology.

At the moment, it is still too early to say whether the technology that is described in the patent filings will become a reality. There are a lot of obstacles that the Korean tech giant has to overcome such as battery life limitations. However, if the company can do that, it can greatly boost its bottom line and solidify its leadership position in the tech market.