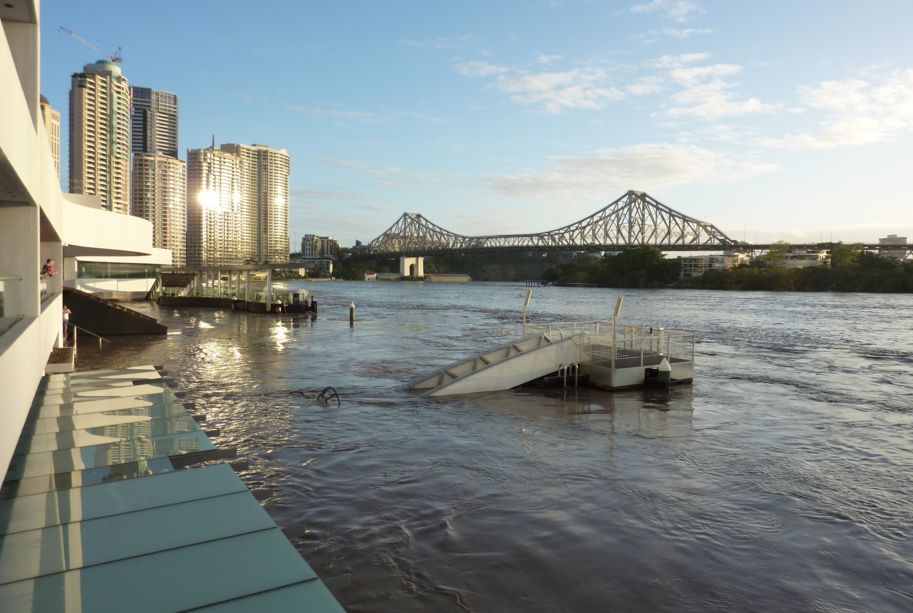 A few years ago, in January of 2011, Brisbane, Australia experienced flooding that resulted in ferry terminals being washed away and severe damage to bridges and infrastructure along the Brisbane River.

Soon after, it was determined that a more controlled ferry terminal release mechanism was required, capable of being rotated back in position after the flood waters receded.

RUD was eventually contacted by a consulting engineering company to help solve the problem of decoupling a ferry terminal.

The maritime environment matched the key features of RUD’s Tecdos, and after some initial discussions, Tecdos was called upon to meet the scope of the project. RUD’s Tecdos was specified for the following features: RUD offered a proposal for a component kit including 16 x 45 (TEC65 grade) chains, wheels, end terminations. Since RUD’s Tecdos chain is zinc coated, RUD knew the chain would not rust on a fixed terminal, seeing as how it is seldom used.

Ultimately, the unique RUD mechanism releases the chains through a dampener to control and lift the rotating gantry free from the cradle.

The control arm uses the chain to lift and decouple the walkway, enabling it to release and rotate in a controlled manner to be downstream in the river flow.

In addition, the chain is restrained until the river level is too high or a large build up of debris forces the walkway to rotate and become in line with water flow, ensuring it will no longer break free under flooding conditions.

One pocket wheel is fixed to the dampener to control the speed while others are used to lift and control the gantry for effective release of the rotating gantry.