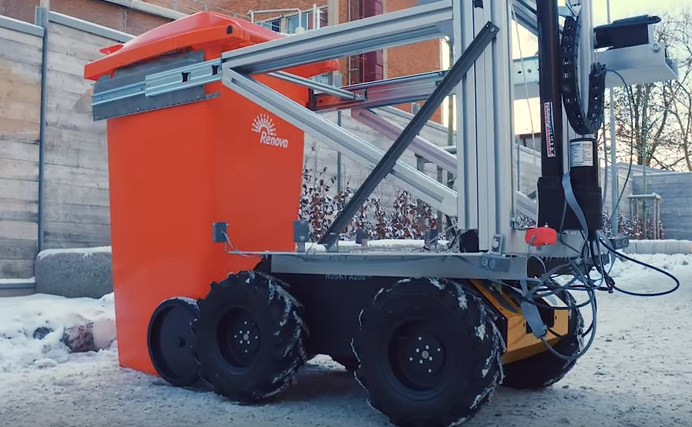 A few months ago, I reported on the Volvo’s ROAR project, an autonomous trash collection service that relies on robots.

ROAR, which stands for Robot-based Autonomous Refuse handling, is a collaboration between the Volvo Group, Chalmers University of Technology, Mälardalen University, Penn State University in the US, and Renova.

After four months of development, the prototype system has launched, featuring a drone-controlled robot which dismounts off the back of a garbage truck and then uses LIDAR, GPS, cameras, and other sensors to locate and ultimately empty trash bins.

Of course, the ROAR project has safety features as well to ensure the robot will not run over children or go into traffic.

Students from three universities have collaborated with the Volvo Group and the waste recycling company, Renova. The result is a robot that automatically collects and empties refuse bins. A drone on the roof of the refuse truck scans the area and assists the robot to find the bins.

The ROAR project, Robot-based Autonomous Refuse handling, is a collaboration between the Volvo Group, Chalmers University of Technology, Mälardalen University, Penn State University in the US, and Renova.

Mälardalen University was responsible for designing the robot itself and Chalmers University of Technology developed the operating system for the robot and the drone. Penn State University developed a web based 3D interface that allows the driver in the cab to have an overview of all the systems and thus able to take control of the robot should it be necessary.