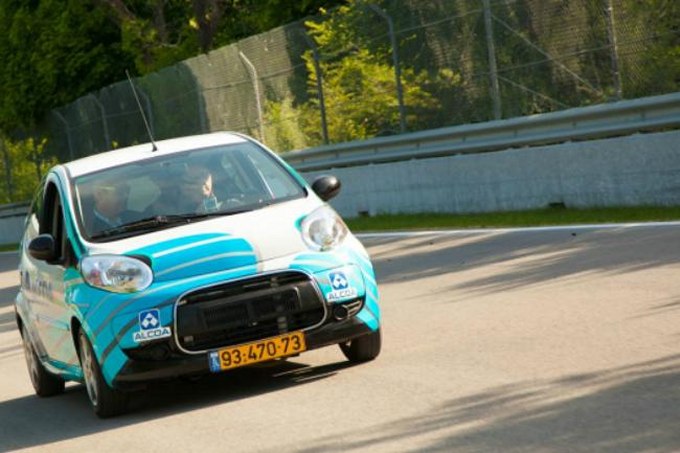 Don’t feel like stopping to charge up your car? This one will go 1,000 miles on a single charge. Photo © Alcoa

One of the biggest obstacles facing the wider uptake of electric cars is the range, or as some manufacturers call it, “range anxiety”, the fear that your battery just won’t cut it for the entirety of your journey. There’s some interesting research happening in the U.S. and Europe right now that hopes to extend the battery life of lithium-ion batteries. In Canada, we have just gotten the first glimpse of a car whose makers claim can travel 1,000 miles on one charge.

The modified Citreon C1 car, which was unveiled in Montreal earlier this month, has been brought to life by Alcoa Canada and Israeli battery manufacturer Phinergy. The new car uses the regular lithium-ion battery but also employs an aluminum-air battery, a relatively new innovation. The combined power of the two batteries could see cars take on 1,000 mile journeys.

Phinergy and Alcoa are hoping to conduct road tests in Quebec in the near future but will require approval from the government.