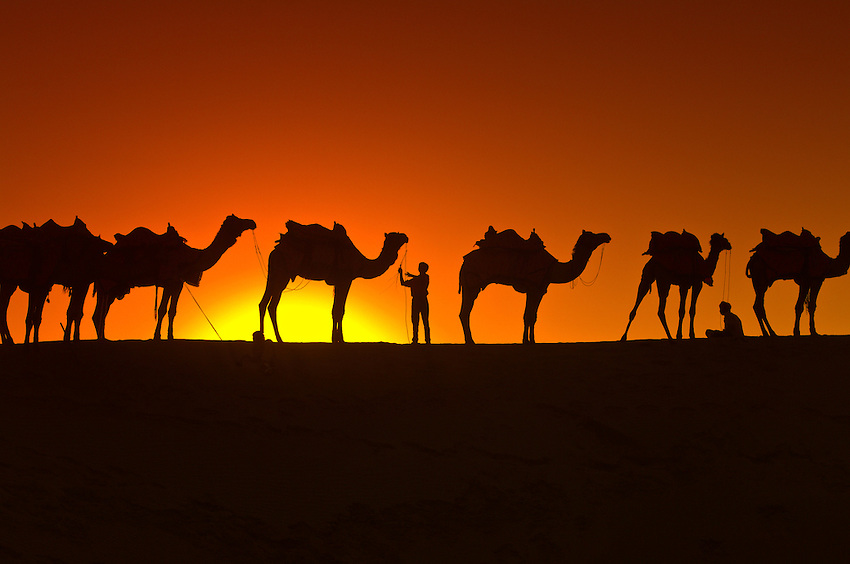 In a recent post we took a look at how China will spend $300 billion to expand its HSR lines across China to about 17,000 miles by 2020 thereby outspending the rest of the world combined. Not surprisingly China has grander plans. Deep in China’s memory and history is the Silk Road, an historic network of trade routes that connected Asia with Europe, the Mediterranean and parts of North and East Africa and made China wealthy and powerful. The Silk Road was dominated at first by Chinese silk destined for European aristocracies and then spread to other commodities and it all began 250 years before the birth of Christ. A line of camels mounts a rise in the Kanoi Sand Dunes, Thar Desert near Jaisalmer, Rajasthan, India

The silk Road is credited for the spread of development in China, India, Persia, Europe, and Arabia. The Silk Road led to political and cultural exchanges amongst vastly distributed populations and flourished for about 1,400 years before being snubbed out by the Mongols.

China has an ambitious timetable for the Eurasian High Speed Network hoping to have it up and running by within two decades. The network would allow passengers to travel roughly 6,000 miles at speeds of up to 200 mph.

Engineers are now considering three different routes, one passing through India, Pakistan, and the Middle East another through Russia and Germany and a third extending south from China to connect Vietnam, Thailand, Burma and Malaysia.

Financing the project is the big issue. China is offering to finance parts of the project along the paths of the trains in exchange for valuable natural resources such as lithium found in Burma. Other potential sources of funding are private companies and host countries.

Besides the political and cultural integration that would likely occur with a new silk Road economics is the most important consideration and the Chinese Railway Ministry has stated that a two track bullet train can transport 160 million people a year whereas a 4 lane highway is only able to transport 80 million.