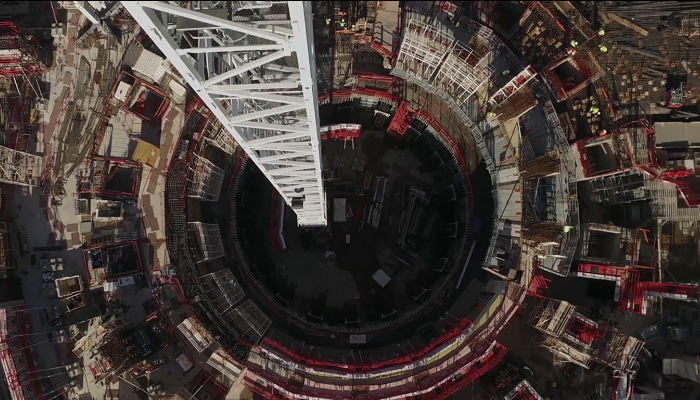 ITER In “Let There Be Light” Documentary

On March 10th a new documentary premiered at the South By Southwest Festival [1].  The name of the film was “Let There Be Light.”  This was a labor of love by the company Eye Steel Films [2].  The Canadian firm has been working since 2013 to develop a quality documentary on nuclear fusion [3].  The co-director, Mila Aung-Thwin was tired of the same old refrain about fusion.  “You always see the same story: the sun, a dreamy researcher, a tokamak and thirty years away.  That story has been told many times”[4].  This movie is different [5].  It zips through several fusion efforts: ITER, General Fusion, Focus Fusion and the Stellorator.  It also interviews both researchers and administrators on the state of their field.  Most viewers come in fresh – they know nothing about fusion.  For them, this is an eye-opener.  The public had mostly not heard of the giant ITER project or any of the fusion startups trying to compete with it.  For them – this is a whole new world. I traveled to Toronto to see the Canadian premier, in person. It was exciting.  Personally, the most shocking part of the movie was: the ITER project.  As a tokamak outsider, ITER has always looked like an impenetrable, opaque effort.  What is happening?  Who works on this?  Why is it so expensive?  The movie dives right into these questions.  We meet Dr. Mark Henderson, who heads up the heating systems on the machine.  He is portrayed a good guy.  He is shown fighting for a technology he believes will change mankind, while mired in ugly bureaucracy.  We also meet an Italian named Allesandro Bonito-Oliva [5].  He is portrayed as a hard charging manager; driving his team forward.  But, the real character in this movie is the ITER bureaucracy.  It takes on a life of its’ own.  A web of tense, agitated bureaucrats pushing and pulling with each other.  Delicate communication.  Politics.  Critics both inside and outside the organization, jostling for space.  It was uncomfortable to watch. There is a stark contrast between ITER and General Fusion (the company).  The startup is really embodied by its founder: Dr. Michel Laberge.  People have stereotypes about physicists. In the vein of Doc Brown from Back To The Future; they are supposed to be loveable, offbeat and brilliant.  Dr. Laberge is portrayed in this way.  People like him.  He argues for fusion – and makes a good case.  Also, it is not an accident, that he gets the last word in the movie.  The film is starting to cement Leberge as a minor celebrity in this field.  Great.  The public needs someone to root for.

The other person we meet is Eric Lerner.  During this chunk, the film is a true documentary: it presents things as they are, with no opinions given.  Mr. Lerner is eccentric.  Having met him in person, I can attest to this.  He has been fighting for legitimacy for decades and despite the fact that he has almost no support, he has persisted.  The film gives Lerner a great platform to call for a broader crash program.  That said, I cannot comment on his approach.

This week, in my hometown, the lake flooded.  In fact, flooding destroyed thousands of homes and businesses across our entire state [6].  The region had seen its’ third wettest April since record keeping began – in 1900 [6].  Excessive rain, due to a changing climate, has inundated the land, rivers and lakes.  This destroyed homes and disrupted lives. We know that climate change comes from the burning of fossil fuels.  We also know that fossil fuels will run out.  Fusion – with the huge amount energy it can produce – could change all of this.  This movie tells that story.  You should see it.  It does the field justice.  It is a good film.  For outsiders, it tells a new story.  For insiders, it offers insight into a diverse set of efforts.  But, the overall message is the same: the world is not paying attention.  If we want to realize fusion, we must change this.

The article was originally published on The Polywell Blog.