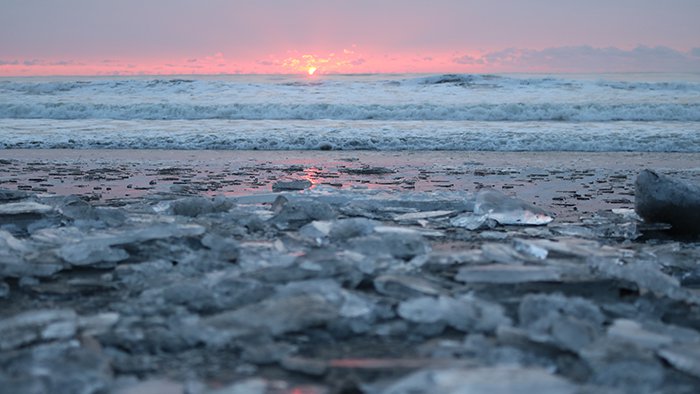 Every winter, some magic happens at the mouth of the Tokachi River on Hokkaido, the northern island of Japan. The beaches get covered with unique crystal-clear ice blocks that look like sparkling jewels. This beautiful natural phenomenon is very rare, and it only washes up in Japan during the coldest winter months.

These crystal-clear ice blocks are known as “jewel ice” or “Tokachi River ice.” They shine like diamonds, and they give off different colors: colors change with the time of day and the color of the sky. These ice crystals glow like amber when the sun rises and when it sets; during the day they look blue and give off sapphire hue beneath evening moon beams. The best months to see these crystal-clear ice blocks are January and February.

In the winter season, with the drop in temperature, the mouth of the Tokachi River freezes over. Blocks of ice formed break off and are drifted out into the ocean and are then washed up on the shore. On shore, these ice blocks accumulate and eventually melt into the sand.

Peter Wadhams, an ocean physicist at the University of Cambridge who studies polar oceans and sea ice, said, “I had never heard of this type of ice and have never seen any sea ice like it. It’s just river ice, which is transparent because it has no salt in it.”