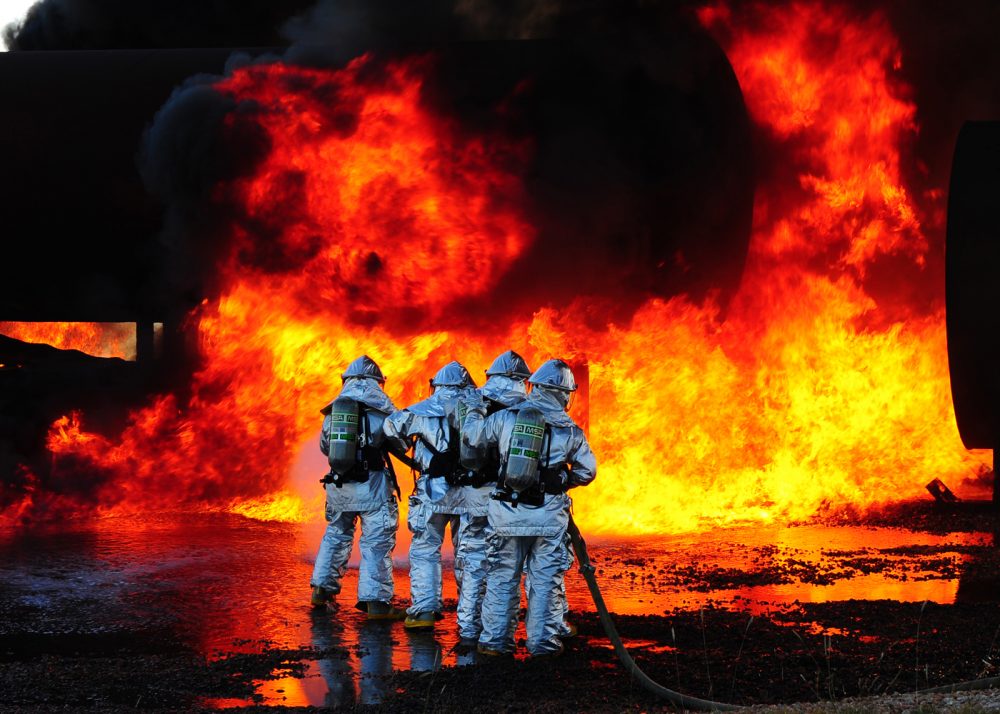 Industrial Fire Dyess and Abilene Regional airport firefighters team up to extinguish an aircraft fire during a joint training exercise here Nov 5. Firefighters from ABI are required by the Federal Aviation Association to be proficient in extinguishing aircraft fires. By inviting them onto the base, Dyess firefighters facilitate a means to achieve their annual training and foster a working relationship. (U.S. Air Force Photo/Airman 1st Class Chelsea Cummings)

When a tank at an oil or gas storage facility spills its contents, the next thing that might happen is a fire followed by a huge explosion. This type of event, known as a tank hazard, is the responsibility of a company’s industrial fire brigade if it exists. An industrial fire brigade meets the NFPA 1081 Standards for Industrial Fire Brigade Member Professional Qualifications. If companies don’t have a licensed fire brigade, people will run around like ants and matters will quickly go from bad to worse.

Storage tanks with any type of flammable contents present the potential for extremely hazardous spills, releases, fires, and explosions that can damage property, kill workers, and inflict the same on local populations.

But not all disasters in industrial settings require flammable liquids. A recent huge fire at an industrial site in Southern California was caused by wooden shipping pallets. During California’s recent drought dry conditions, coastal winds and bad luck led to a series of similar fires. And fires often break out at abandoned industrial buildings that still contain substances that can create thick black smoke and burn an industrial building to the ground. In Plainville Township, Pennsylvania a huge fire destroyed the Nicos Polymer plastics recycling company.

Some fires are unavoidable, but many after incident reports suggest that more than half of industrial fires are caused by human error which usually means the company has neglected to properly manage the materials under its control. Cutting corners on safety can save significant amounts of money until a disaster happens. In short, building owners, developers, general contractors or company employees have failed to achieve fire protection that meets national building codes.

For example, see an oil refinery and chemical plant explosion last summer in the video below: