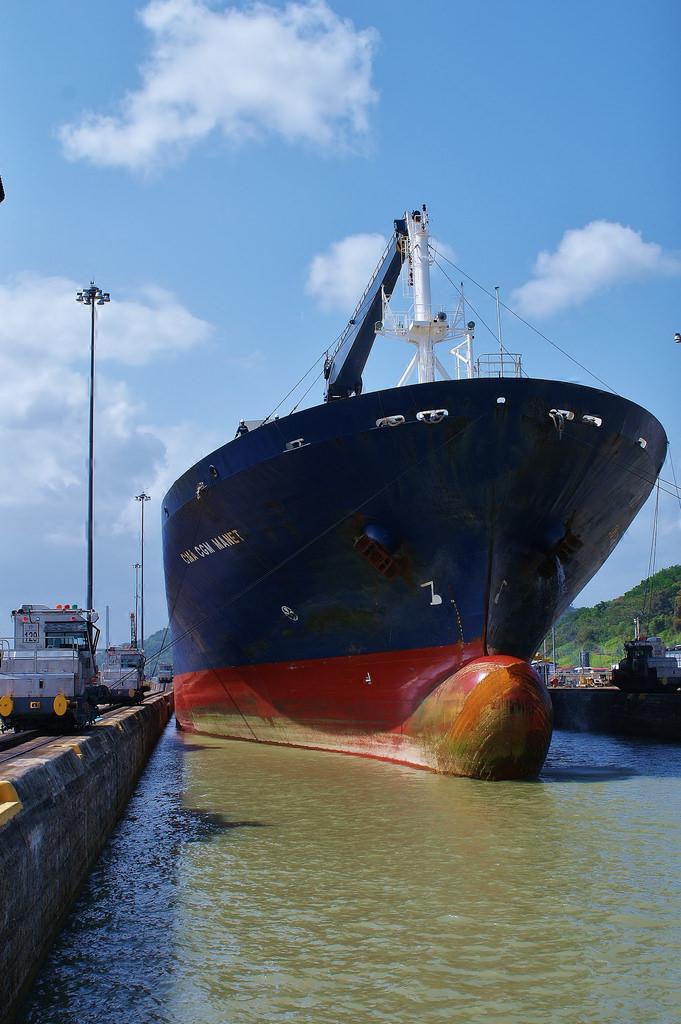 The Panama Canal Authority began the process of expanding the nearly century old Panama Canal in 2008 through a $5.52 billion project scheduled for completion in 2015.  The expansion program includes four major components: “New-Panamax” locks, a Pacific access channel, improvements to navigation channels and improvements to water supply.

New Panamax refers to size limits for ships traveling on the Panama Canal.  The maximum size of a ship is increasing to 366 meters (1,200 feet)  long by 46 meters (150 feet) wide as opposed to the current maximums of 292 meters (958 feet) by 32 meters (106 feet).  The container capacity of ships will increase from 5,000 to 12,000 TEU or “twenty-foot-equivalent-units” which refers to volume of the containers that can be accommodated by a ship.  The maximum draft of vessels, which refers to how deep the ship can float in the canal, will increase to 15.2 meters (50 feet) from 12 meters (39.5 feet).

On the US East Coast alone, ports from Boston and New York to Baltimore and Miami are in the midst of multi-billion dollar projects to deepen ports and docks to handle the much larger ships.  Ports everywhere that use the canal are in a competitive race to capture the increased traffic expected from the new canal.

Pacific Access phases one to four included excavations including the leveling of Paraiso Hill from 135 meters to 45 meters above sea level and the clearing of 146 hectares of firing ranges known as MEC (Munitions and Explosives Concern).  Another excavation of 7.4 million cubic meters of earth and a 3.5 kilometer diversion of the Cocoli River and the relocation of 1.5 kilometer Borinquen Road followed.  After that, a channel dry-excavation project costing $268 million included the excavation of 26 million cubic meters of earth, the construction of the Borinquen Dam and separating the waters of Miaflores Lake from the new channel.

Pacific Access phase 5 included the widening of the Panama Canal Pacific entrance navigation channel to a minimum of 225 meters and deepening it to 15.5 meters below the mean lower water level.  Finally, came the partial construction of the Pacific Post-Panamax locks south access.

Phase 6 included the dredging for the deepening and widening of Gatun Lake and Culebra Cut with the removal of 27 million cubic meters of earth.  Involved in this phase were drill boats Thor and Baru and dredges Mindi, Rialto, and Il Principe.

In 2009, at a cost of $89 million, work began on the deepening of the Atlantic Entrance to 15.5 meters.  Dredging removed 14.8 million cubic meters of earth and an area about 14 square kilometers was dredged to widen the Atlantic Access Channel; this involved widening the channel from 198 meters to 225 meters.

The new locks have three chambers each, water saving basins on each level, and a lateral filling and emptying system with rolling gates.

The Water-Saving System saves water by positioning water-damming structures adjacent to the locks and connecting them with culverts that uses valves to regulate the flow of water.  Overall the new technology will use 7% less water than current locks.

Construction of the Third Set of Locks

The construction of the Third Set of Locks represented approximately 60 percent of the overall budget for the Expansion Project.  This phase required the construction of contractor and subcontractor offices, office buildings, storage areas, laboratories, building of the main plant to produce concrete and crush rock, utility installations, and more.

The team handling this phase of the project was involved in a variety of key activities: overseeing equipment mobilization, ground movement and the implementation and installation of security measures and devices.

The Panama Canal Expansion project is expected to improve the flow of traffic, tonnage, and profitability of the Panama Canal, making it a viable operation for decades to come.