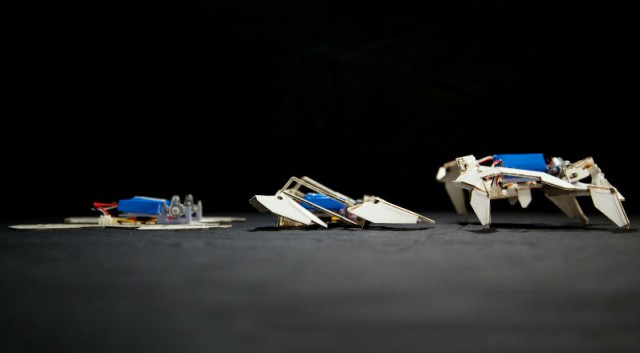 Origami is the traditional Japanese art of paper folding, which started in 17th century. But this art became popular only in the 1900s and has since evolved into a modern art form.

The purpose of origami is to transform a flat sheet of paper into a finished sculpture. The art is very popular amongst Japanese kids, who learn how to create origami as early as nursery school and kindergarten. But folding papers into new shapes is not just for kids anymore.

Now a team of engineers from Harvard and MIT has created origami robots from a flat piece of paper and polystyrene. The polystyrene is the same material used in Shrinky Dink, a kid’s toy invented in the 1970s. Shrinky Dink changes shape when heated to a particular temperature.

How does the robot come to life?

First, the multilayered sheets of material are folded into a predetermined shape and then the material used in the robot is fitted with circuitry and motors. Once the sheet is hooked up to a battery, heating elements embedded in the material produce heat. The heat causes the hinges to fold into a 3D walking robot. The self-assembling origami robots can take shape and start walking in just four minutes.