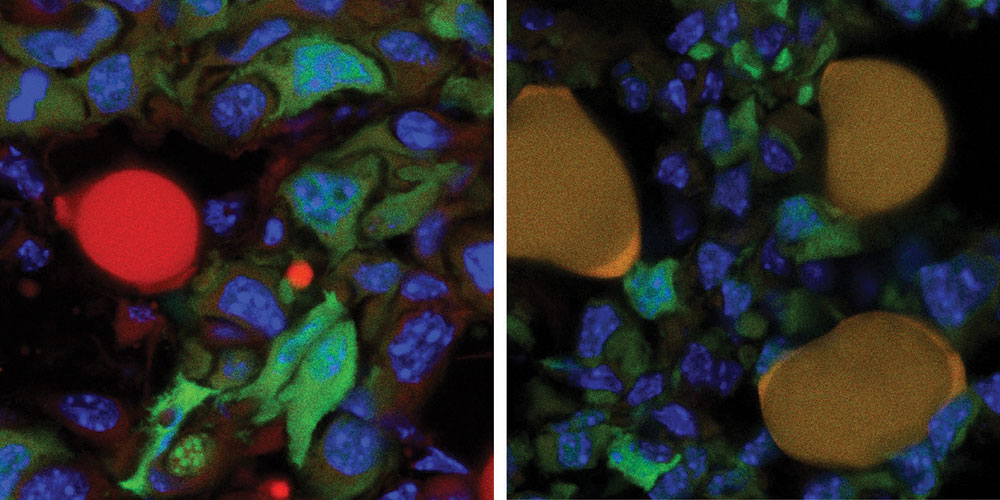 Cancer cells marked in green and a fat cell marked in red on the surface of a tumor (left). After treatment (right), three former cancer cells have been converted into fat cells. The combined marking in green and red causes them to appear dark yellow. (Image: University of Basel, Department of Biomedicine)

In a big breakthrough, researchers from Switzerland’s University of Basel have developed a novel drug combination that can force malignant breast cancer cells to turn into fat cells.

In their experiments on mice, researchers were able to convert EMT-derived breast cancer cells into fat cells…preventing the formation of metastases.

How cancer spreads in our body?

Metastasis is the spread of cancer cells to new areas of the body. Cancer cells escape from primary tumors and grow new tumors or metastases. “Plasticity” allows cancer cells to transform from anchored cells into ones that can travel and invade other tissues. Epithelial–mesenchymal transition (EMT) is one of the tricks cancer cells utilize to spread to other organs.

In this study, researchers took mice implanted with human breast cancer, and treated them with both a diabetic drug called rosiglitazone and a cancer treatment called trametinib.

Basically, researchers made cancer’s plasticity work against itself, and forcing the cells to become harmless fat cells. Fat cells so formed are very similar to normal fat cells and were unable to divide and proliferate.

It is a great concept and researchers foresee that the therapy could soon come for clinical trials, as the drugs used are already approved by the Food and Drug Administration (FDA).

NASA and Boeing Tease the World’s First Commercial Starliner, the CST-100
The Snap Drone From Vantage Robotics Has Redefined the Flying Camera
By the Time You Finish Your Bowl of Cereal the Smart Bowl Will Charge Your Gadgets