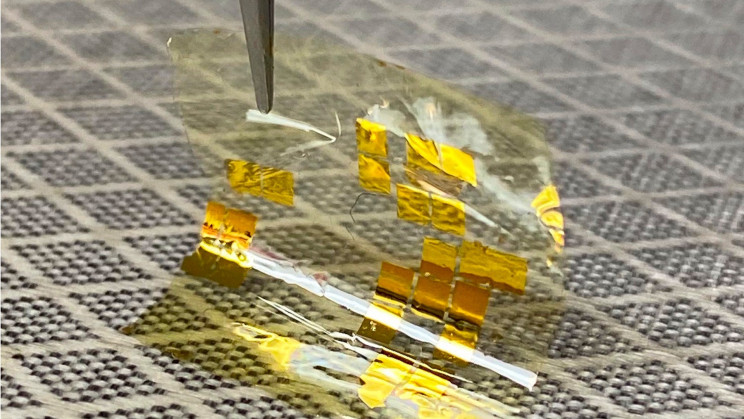 Worldwide scientists are working to create very thin, highly efficient, and flexible solar panels. Now, researchers at Stanford University are developing new solar panel material that is not only efficient but is also fifteen times thinner than paper.

The new material provides an extremely lightweight alternative to silicon-based solar panels. Although Silicon is the most common material used for solar panels, it is heavy and rigid. So it is not well suited for lightweight applications required for aircraft, spacecraft, wearable devices, or electric vehicles.

“Silicon makes up 95 percent of the solar market today, but it’s far from perfect. We need new materials that are light, bendable, and, frankly, more eco-friendly,” said Krishna Saraswat, senior author of the paper.

The Stanford team produced an active array that is just a few hundred nanometers thick. The array has the photovoltaic TMD tungsten diselenide and contacts of gold enclosed in a layer of conducting graphene. It is so fine that it would take 15 layers to reach the thickness of a single piece of paper.

“Imagine an autonomous drone that powers itself with a solar array atop its wing that is 15 times thinner than a piece of paper,” said Koosha Nassiri Nazif, co-lead author of a study. “That is the promise of TMDs.”

The new Stanford prototype achieves 5.1% power conversion efficiency. This is the highest efficiency reported for these cells. But, the researchers foresee that they could achieve 27% efficiency upon optical and electrical optimizations. Moreover, this prototype material also reached a 100-times greater power-to-weight ratio than any TMDs developed so far.