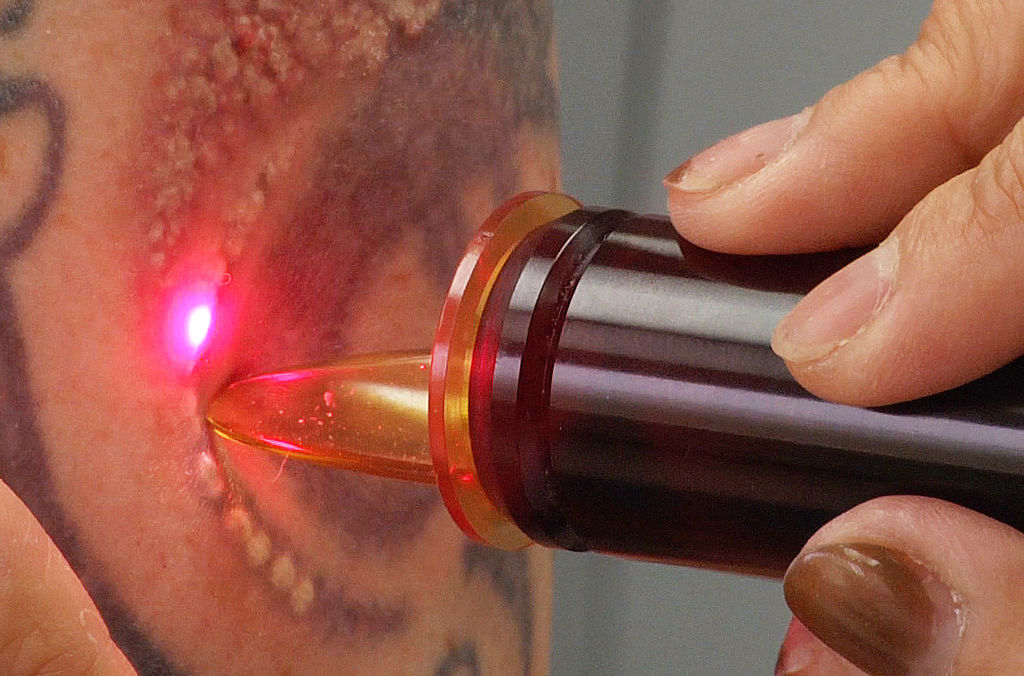 By James Mutter (Own work) [CC BY-SA 4.0], via Wikimedia Commons

Laser technology isn’t exactly new, in and of itself, but its applications are expanding every day and reaching the mainstream. From cosmetic and medical procedures to improving the functionality of everyday devices, new and advanced lasers are showing up everywhere.

Check out some of these new mainstream technologies that feature lasers.

Anyone who has ever had a tattoo removed can attest to the fact that it’s often a long and painful process. Not to mention, traditional laser tattoo removal can leave scarring, and some ink colors cannot be entirely removed.

Thanks to new laser technology, though, bad spring break decisions and the names of ex-lovers can be more easily erased–in less time and with less pain. The new PicoSure laser delivers energy in a trillionth of a second, which creates a pressure wave that disrupts the ink particles in the tattoo. This is in comparison to traditional laser removal technology, which takes longer to deliver energy and causes heat damage to the surrounding skin. The newer lasers can also more effectively remove red, orange, and yellow ink in less time than traditional lasers. The PicoSure can reduce the amount of time required to remove that ironic Chinese symbol on your lower back from one to two years down to six to eight months, all with less pain and minimal scarring.

With the rise of the maker movement, materials and technology that were once limited primarily to industrial applications are becoming more commonplace and extending into the consumer market. Among them are laser cutters, which can be used to create a wide variety of beautiful and useful objects. A large number of schools, maker spaces, and small businesses have started investing in laser cutters, which are capable of cutting many types of materials, including metal and wood. Unlike typical die cutters or drag cutters that use a knife to cut materials like vinyl and paper, a laser cutter can cut through more materials with greater precision.

Laser cutters are becoming more popular in the hobbyist and educational markets because, like so many technologies, they have become smaller and easier to use. Industrial applications still use larger machines that require complex cooling and ventilation systems. But for smaller applications, there is a wide array of desktop models that still offer the same precision cutting capabilities. In fact, many of the current 3D printers on the market rely on laser cutting as it allows for the precise shaping of parts with tab and slot construction to make objects that can be easily built and taken apart.

We may still be a few months away from the long-anticipated iPhone 8, but that doesn’t mean there hasn’t been plenty of speculation about the features and upgrades of the new devices. One feature that is getting plenty of buzz is the possibility of the phones containing a form of 3D laser technology.

Rumor has it that the iPhone 8 will contain new laser and infrared sensors near the front-facing cameras. The rumor is based on Apple’s acquisition of Emotient, a startup that developed laser technology with the capability of not only recognizing faces but also facial expressions to interpret a user’s emotional state. How Apple intends to use the technology in the iPhone 8 remains a mystery, but there is speculation that the laser is either part of a planned expansion into virtual reality, or part of enhanced biometric security for the devices. We’ll have to wait until the expected release date in September 2017 (some have even speculated that we won’t see the upgraded iPhone until 2018) to see if the lasers make an appearance and how they are used.

Lasers are quickly becoming invaluable in the diagnosis of skin cancers—as well as in the treatment of the disease.

In the past, skin cancers were typically diagnosed and treated using Mohs surgery, which involves removing a layer of cells from the top of a known or suspected tumor for testing, as well as surgically removing the entire tumor and surrounding tissue. While this is an effective means of removing most, if not all, of the cancer, it is also invasive and leads to scarring as well as substantial recovery time.

While surgery is still generally part of the treatment plan for some skin cancers, doctors have also begun using laser technology. Resonant Raman Scattering is one of the most common forms of laser diagnosis. Using a 532-nanometer-wavelength laser, doctors can more quickly capture a cross section of the skin cancer, and more accurately identify the amount of tissue that needs to be removed. This reduces scarring and recovery time. In some cases, doctors will treat skin cancers with carbon dioxide lasers, which emit short wavelengths of light energy to remove the affected skin tissue, with minimal damage to the surrounding or underlying tissue.

These are just some of the new mainstream applications of laser technology—and many more are in development. What was once just part of science fiction is quickly becoming an important part of everyday life.

African Killifish May Hold the Secret of Preventing Human Aging