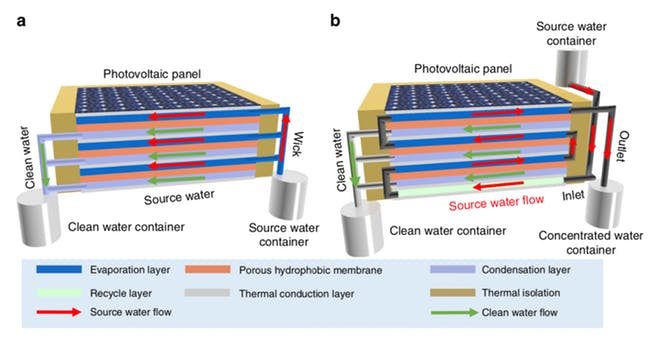 Clean energy and clean water are the basic necessities and are among the major challenges for sustainable development particularly in developing countries.

According to the new revolutionary research published in the journal Nature Communications, scientists from King Abdullah University of Science and Technology in Saudi Arabia have developed Solar panels that not only generate clean energy but also provide clean drinking water.

It could prove to be very useful gadget especially in remote communities, providing both energy and water with a single installation.

Most of the current technologies for purifying water consume large amounts of electricity and require infrastructure which is beyond the reach of many communities that lack basic access to safe drinking water.

The device consists of three-stage distillation unit, mounted to the rear of a standard solar panel. When sun rays fall on the solar panel, about ten percent of  solar energy is absorbed for generation of electricity and part of it becomes thermal energy that’s normally dissipated. That thermal energy is instead used to collect clean drinkable water.

Lead author Prof Peng Wang, said, “The uniqueness of the device lies in its smart and effective use of the waste heat of the [photovoltaic] as a resource, which leads to its high efficiency in both electricity and fresh water production,”

“In a sense, it utilizes solar energy to a much fuller capacity.”