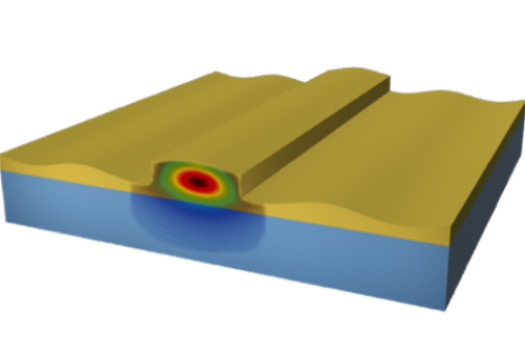 The figure illustrates a sound wave passing across an integrated optical waveguide, overlaid with a color map of the light field in it. (Image courtesy University of Minnesota)

When you hear thunder, you will find that it always occurs after a flash of lightning. This is because sound waves travel much slower (768 miles per hour) than light waves (670,000,000 miles per hour).

Now, researchers from the University of Minnesota have developed a chip that generates both light waves and sound waves while forcing them to interact so that sound can efficiently control light.

This is achieved for the first time on a chip where sound can interact with light most efficiently to achieve high-speed modulation. The new chip was created using a silicon base coated with a layer of aluminum nitride that conducts an electric charge.

Applying alternating electrical signals to the material causes it to deform periodically and generate sound waves that grow on its surface, similar to seismic waves that grow from the center of an earthquake.

As per the lead researcher of the study, Mo Li, this breakthrough integrates optical circuits in the same layer of material with acoustic devices in order to attain extreme strong interaction between light and sound waves.

How to Minimize Stress Levels as a Business Owner