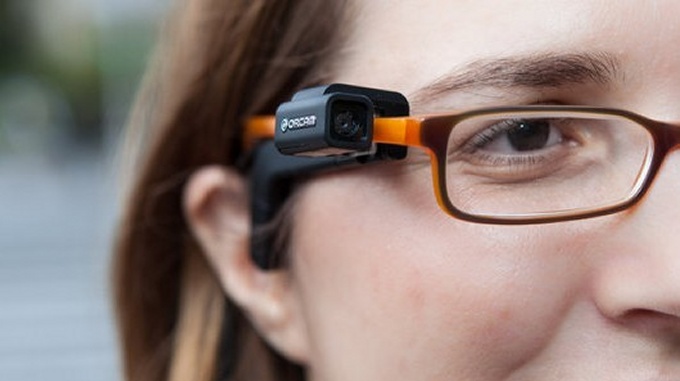 Technological advancements that address health issues or physical injuries are often the most exciting. With much of the tech world going ga-ga over Google Glass, it’s encouraging to see the technology and design principles now being applied to aiding the blind or those with various visual impairments.

The OrCam is an innovative new camera that can be placed on any pair of spectacle frames where it will help the user understand what they are looking at, picking up on its defining features and relaying the information via a bone-conduction earpiece.

“OrCam reads, recognizes faces, identifies objects, products and places, locates bus numbers and monitors traffic lights. It does all that with the most intuitive user interface you can imagine,” explains the camera’s website and it does all of this by just pointing your finger.

Bone-conduction technology has previously been used in hearing aids and even headphones. A small headset is worn on the person’s head or around their jaw or temple with an electromechanical transducer that breaks down the sound and converts electric signals into mechanical vibrations that are sent to the ear via the cranial bones.

Technology used by the camera could also prove life-saving. While the camera can read words and letters and recognize objects and faces, it can also pick up on traffic lights. As the company’s website details, the camera will recognize pedestrian crossing lights by their color and shape so the wearer can safely cross the street. It’s a simple but vital component of the camera, which also reads interactive bus signs and timetables.

The device can be of use to many different needs and not just the visually impaired. The camera’s ability to read labels and signs can be helpful to people with dyslexia or even dementia.

The camera, in many respects, mimics the human eye so it still requires a well-lit area in which to function and cannot be used in the dark. The device also relies on sound to convey its information through the earpiece but can still be functional if the user requires a hearing aid.

OrCam began in 2010 with the plan to devise a gadget that could be of real use to the people that really needed it. “We met with dozens of visually impaired and blind individuals to find out what they miss the most and designed our device to address those issues while keeping it user friendly,” says the company.

“We have assembled a team of engineers, most of whom came from elite technological units of the IDF and academia. Over the past three years, the system was developed, tested and refined.”

The company’s September shipment of OrCams is already sold out but they anticipate a restock by the end of the year. The camera is priced $2,500. Currently, OrCam is only available in English but according to their website, the developers are working on new languages for the device.