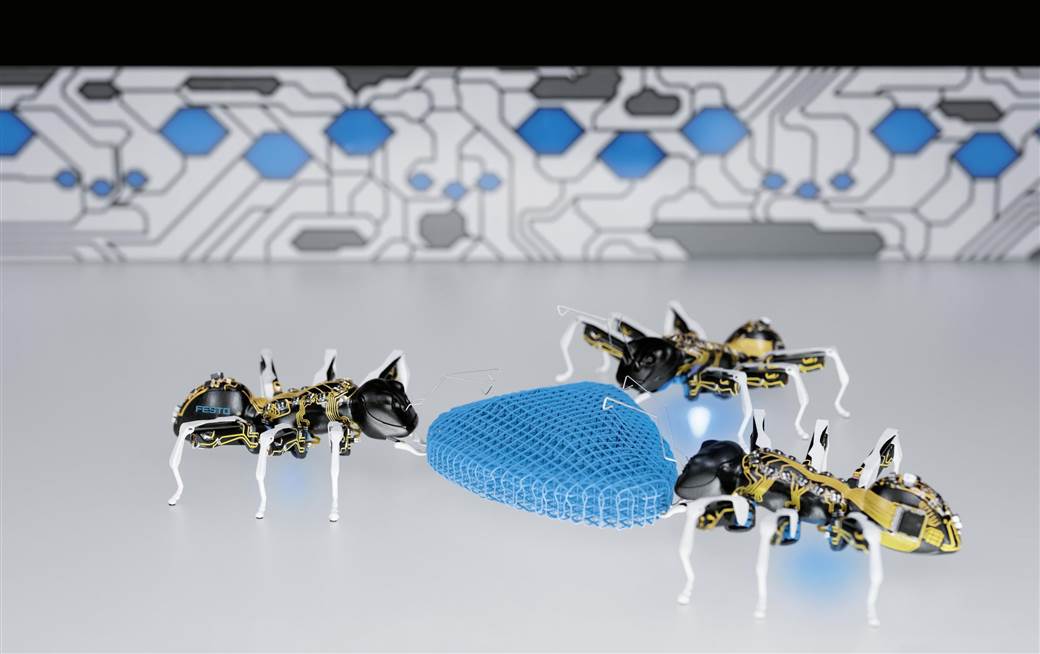 German engineering firm Festo, a leader in pneumatic and electric automation, has designed and manufactured new robotic bionic ants that run on ceramic motors, see using optical lasers and communicate by Wi-Fi. Known as Bionic Autonomous Networking Technologies (ANTs) the new ants are part of Festo’s Bionic Learning Network Program and are intended to eventually be used for manufacturing and technical tasks. The ants will be introduced at Hanover Messe, the world’s largest Industrial Technology Trade Fair from April 13-17, 2015.

According to a Festo spokesperson the ants use pneumatic and piezoelectric components to cooperate and coordinate their movements and to achieve tasks together such as moving small objects across a surface. Festo has designed its ants mimicking the anatomy of living ants and have also tried to replicate the cooperative nature of ant colonies. Festo has also designed butterflies for its Bionic Learning Network and is planning on more biomimicry projects in the future.

The firm is creating bionic intelligence using ant colony algorithms (ACA) and ant colony optimization (ACO) which have been developed over the years to guide multi-robot cooperation, aka “multi-robot task allocation” (MRTA)

According to researchers the emerging field of “swarm intelligence” is being combined with cloud computing and used by scientists and engineers to try to solve pressing global problems.

An algorithm called the Anti-Net algorithm divides ants into forward and backward positions as they go about communicating to solve problems. Movements are also coordinated using the Anti-Density Model, Anti-Quantity Model and others.