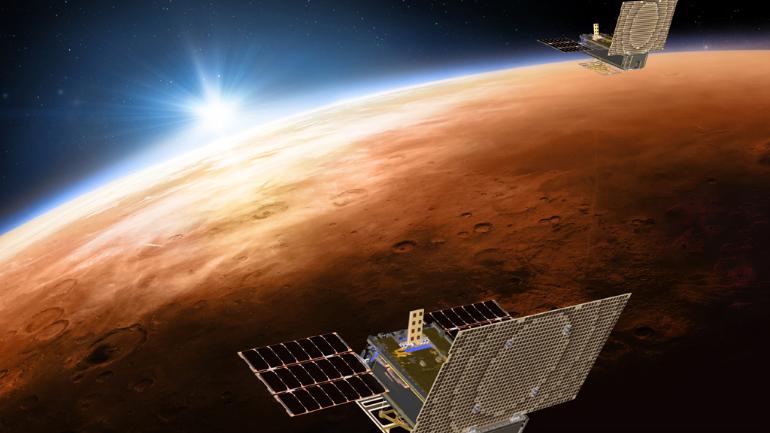 An artist’s rendering of the twin Mars Cube One (MarCO) spacecraft flying over Mars with Earth in the distance. The MarCOs were the first CubeSats flown in deep space. (Image: NASA/JPL-Caltech)

NASA’s CubeSats MarCO-A and B (nicknamed WALL-E and EVE) have mysteriously gone silent after zooming past Mars. NASA has no clues why this happened.

These briefcase-sized satellites were launched from Earth in May 2018 and engineers hailed the mission, as a great success. But both the satellites have not communicated with the space agency for more than a month.

It is unlikely the pair will ever be heard from again. But NASA considers MarCO a spectacular success.

According to engineers, having done that, their mission was pretty much over and they consider it as a major success.

“This mission was always about pushing the limits of miniaturized technology and seeing just how far it could take us,” said the mission’s chief engineer, JPL’s Andy Klesh, in a news release. “We’ve put a stake in the ground. Future CubeSats might go even farther.”

“There’s big potential in these small packages,” said John Baker, the MarCO program manager at JPL, in the statement. “CubeSats – part of a larger group of spacecraft called SmallSats – are a new platform for space exploration that is affordable to more than just government agencies.”