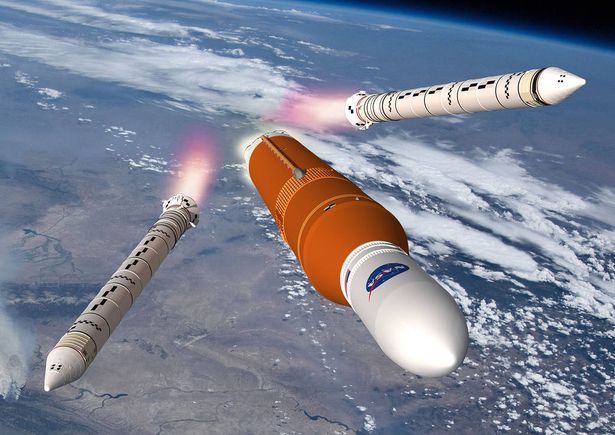 NASA invited the press and a few select people to take a first look at the rocket system that was developed for the Artemis Project. The program is actually a collaboration between NASA, ESA, JAXA, and CSA, while the main goal will be to send astronauts to the Moon after so many decades, including the first woman to reach there. The program includes three missions so far, with the first being scheduled for launch in November 2020.

The launch vehicle will be the “Space Launch System” (SLS), which is a super-heavy, extra-large rocket that also happens to be the most powerful that humanity has ever built. The reason for making SLS so smacking is that it will be called to carry a heavy payload to the Moon. More specifically, a maximum of 45 tons of cargo that has a volume of 905 m3.

The two-stage rocket stands at a height of 111.25 meters and has a diameter of 8.4 meters. This is enough to hold 2 million liters of supercooled liquid hydrogen fuel which is what the SLS’s Aerojet Rocketdyne RS-25 main propulsion engines use. Each one of these produces a thrust of 2279 kN at vacuum, or 1860 kN at sea level. They will burn for eight full minutes, taking the spacecraft to its apogee, measuring a speed of 27400 kilometers per hour at that point.

NASA has told the press that their tests were very vigorous and that they pushed the rocket well beyond its limits to ensure its robustness. The SLS is reportedly able to tolerate 13 tanking cycles, and it can safely stay at the launch pad in an assembled state for 180 days, which is indicative of its high build quality. With the SLS development having a cost of more than $7 billion already, at least the end result seems to be vindicating for the rocket engineers.