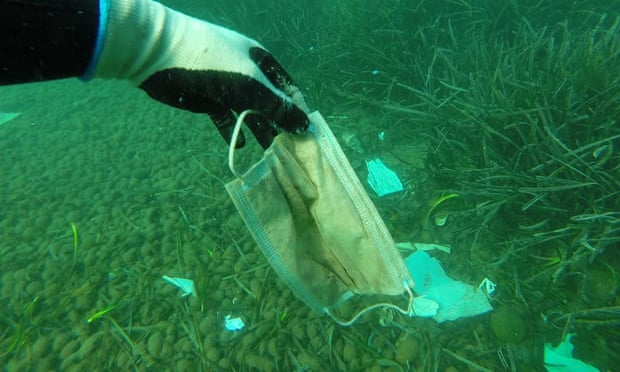 We all are aware of impacts of plastic pollution on marine life. But there is no sign of relief for already threatened marine life and marine ecosystems.

Now Environmental organizations are raising alarm about the increasing pollution due to corona virus wastes in oceans.

Millions and millions of people are wearing gloves and masks today. But the way they’re disposed of is putting marine life at risk.

Activists from French non-profit Opération Mer Propre, began raising the alarm late last month. While picking up litter along the Côte d’Azur, divers found large amount of gloves, masks and bottles of hand sanitizer beneath the waves of the Mediterranean. Off-course it was also accompanied by standard litter of disposable cups and aluminium cans.

Similar concern is being raised for the shores of Hong Kong by the activists of OceansAsia. Conservationists say the water around financial hub already has high levels of plastic wastes and COVID wastes are going to worsen the condition.

OceansAsia’s Gary Stokes, explained about marine debris in the city’s uninhabited Soko Islands, “On a beach about 100 meters long, we found about 70, and that’s on an uninhabited island in the middle of nowhere.”

However when Strokes checked nearby beaches, he said, “We’re finding them everywhere,” “Ever since society started wearing masks, the cause and effects are being seen on the beaches.”

Conservationists from Opération Mer Propre, have warned that the corona virus pandemic is adding to a glut of plastic waste. In coming times, there will be more gloves and masks than jellyfish in the Mediterranean.

Watch All The Steps It Takes to Repair a $30,000 Earth Mover Tire