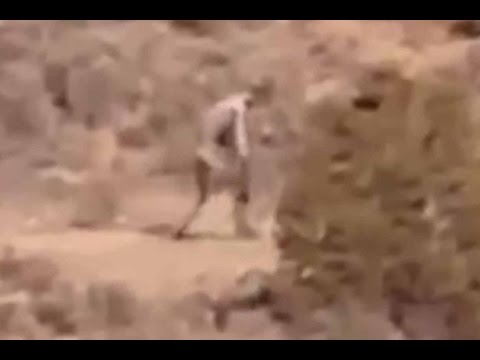 The elusive ‘Chupacabra‘ is a mythical creature said to exist in parts of Latin America. It supposedly attacks livestock, especially goats, and drinks the blood of its victims.

The word Chupacabra is translated from Spanish as ‘goat-sucker’ from chupar (to suck) and cabra (goat). The myth of the Chupacabra first began in Puerto Rico when farmers found their goats dead and all their blood drained out.

The mysterious creature was caught on video wandering through the scorching landscape of Portuguese desert. The footage went viral in earlier this month with over a million views on YouTube.

The poor quality video footage has divided the internet. Some claim that the strange alien entity looks like a Chupacabra; others say it’s Big Foot or maybe a cross between Bigfoot and a Chupacabra. Some even say it’s a hoax.

Now, it’s up to you to decide!