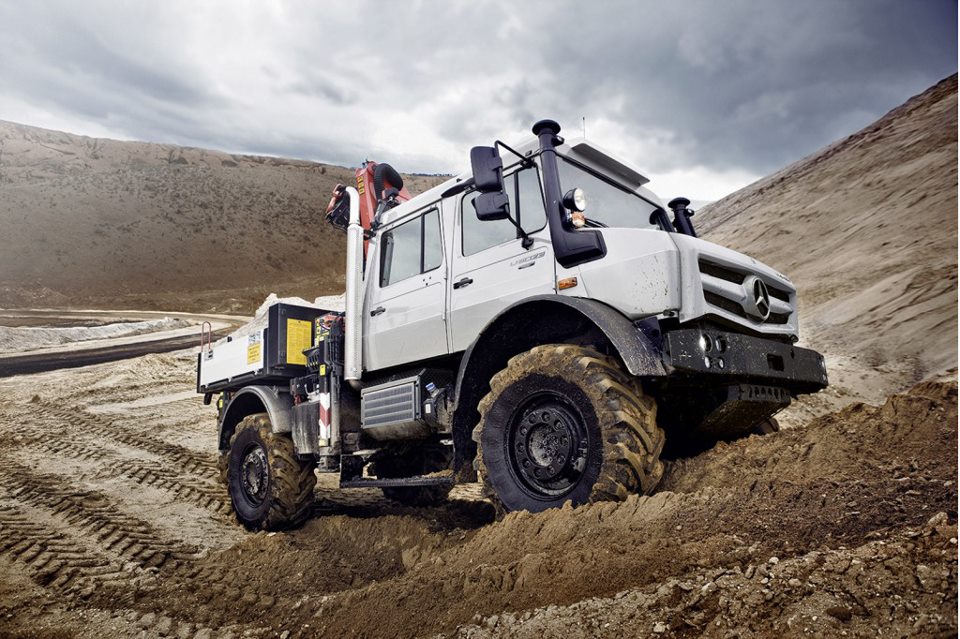 From the company that sold the world’s first bus in 1895 and truck in 1896, Mercedes-Benz this week introduced a new generation of trucks for 2014: the Unimog extreme off-road series and Econic trucks. Both models will begin rolling off the assembly line in autumn 2013 featuring state-of-the-art engines in compliance with new emission and efficiency standards.

The Unimog is described as a multi functional work tool.  It features a “panoramic” cab with an iconic and stylized grille, LED daytime running lights and new windshield wipers mounted from above to improve visibility. The engine will be Euro VI compliant four-and six-cylinder motors with outputs from 156 hp (116kW) to 354 hp (260kW). In addition the vehicle includes a multi functional steering wheel, steering column, multi functional touch keys and an improved heating and ventilation system.

The Unimog lineup includes 10 models and several two and three-axle designs to meet the needs of almost any industrial job imaginable.

Reports are that the Unimog design is simple, utilitarian and without flashy add-ons but will get the job done. Unimogs come with hearty axles and frames that support gross vehicle weight up to 14.5 tons. The vehicle has many hydraulic ports in the chassis and frame providing synergetic resiliency and stability. Econic emissions will also be cut significantly and fuel efficiency improved by up to 4%. A wide array of drivetrains are available and two and three axle versions as well.