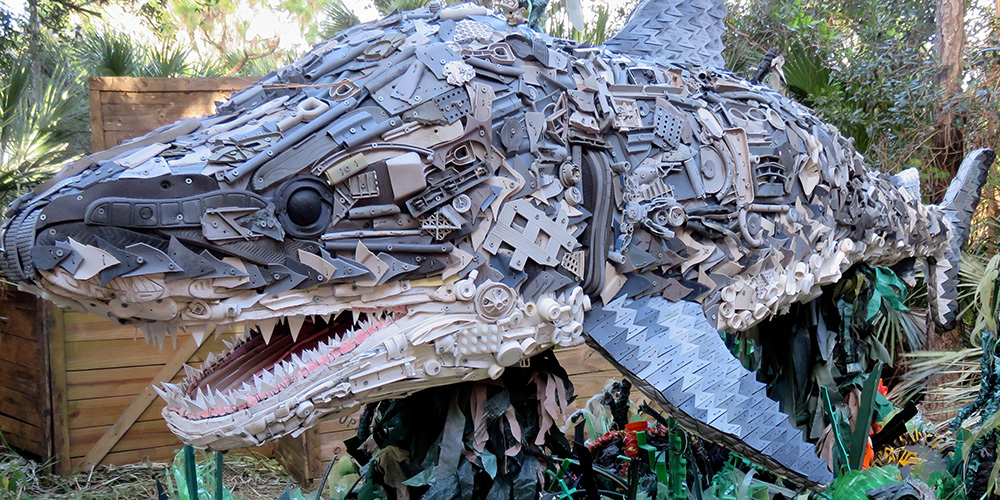 The larger than life sculptures travel to various zoos and aquariums, where the displays have proven so popular that they even increase the attendance wherever they exhibit. It’s no wonder! They are stunning replicas of the real things that, true to the nature of art, offer a reflection on our human perspective.

Washed Ashore calls the creatures “Ambassadors.” They sport names such as Sebastian James the Puffin, Herman the Sea Turtle, Lidia the Seal, Octavia the Octopus, and Flash the Marlin. There are about 65 of the sculptures on tour, with new ones being created all the time. Exhibits are currently displayed at the Smithsonian National Zoo and Atlanta’s Georgia Aquarium until September 5th, 2016. The exhibits vary in size from eight to 30 pieces and can consist of both indoor and outdoor sculptures of various shapes and sizes. Some are stand-alone while others can hang. The displays come equipped with an educational team to incorporate art, science, and ecology into the program.

These sculptures are a shocking reminder of the effect of our human consumption and waste. They are crafted using the garbage collected by volunteers during beach clean-ups, who have removed more than 18 tons from Oregon’s shores. “Approximately 80% of marine debris comes from land-based sources; from streets to streams to oceans.”

The process of collecting, sorting, cleaning, and finally reusing, is detailed and lengthy, requiring many hours of human collectivism, from professional artists to students and volunteers. A wire frame is shaped and then begins the artistic decision-making process of selecting the perfect piece of trash for a particular spot. Some of the debris collected is typical, such as flip flops,  plastic bottles, fishing nets, lighters, combs, toys, and, of course, plastic bags. But, some of the displays have more unusual items incorporated into the design. Flash the Marlin is comprised of oddities including three fishing poles for the pointed mouth, sunglasses, a deflated beach ball for eye sockets, and even a toilet seat. The organization was founded by former arts educator Angela Haseltine Pozzi. She used her Masters in Art Education, and her international renown as an exhibiting artist, to found an organization in 1990 that used recycled materials to make 3-D art kits. Then, in 2008 she initiated an art retreat and residency site that, in 2010, morphed into the Artula Institute for Arts and Environmental Education, which creates the Washed Ashore exhibits and runs the daily operations. Angela is certain that this is her “calling” and she claims that “until we run out of plastic on the beach, we will keep doing our work.”

The project’s philosophy is a testament to Margaret Mead’s quote, “Never underestimate the ability of a small group of dedicated individuals to bring about change. Indeed, it’s the only thing that ever really has.” Washed Ashore has proudly logged more than 14,000 hours contributed by some 10,000 volunteers in their six years of cleaning 300+ miles of beaches. Ninety-five percent of what was collected has been incorporated into the sculptures. They also observed that “90% of marine debris is petroleum based.”

The website (www.washedashore.org) offers a wealth of environmental information about the creatures represented and the devastating effects of plastics in the oceans. They point out that 300 million tons of garbage is produced globally per year with only 10% of that being recycled. But, the message of Washed Ashore is not about guilt and despair; it is all about hope and working together to keep trash out of the oceans. “It takes a village to save a beach.”