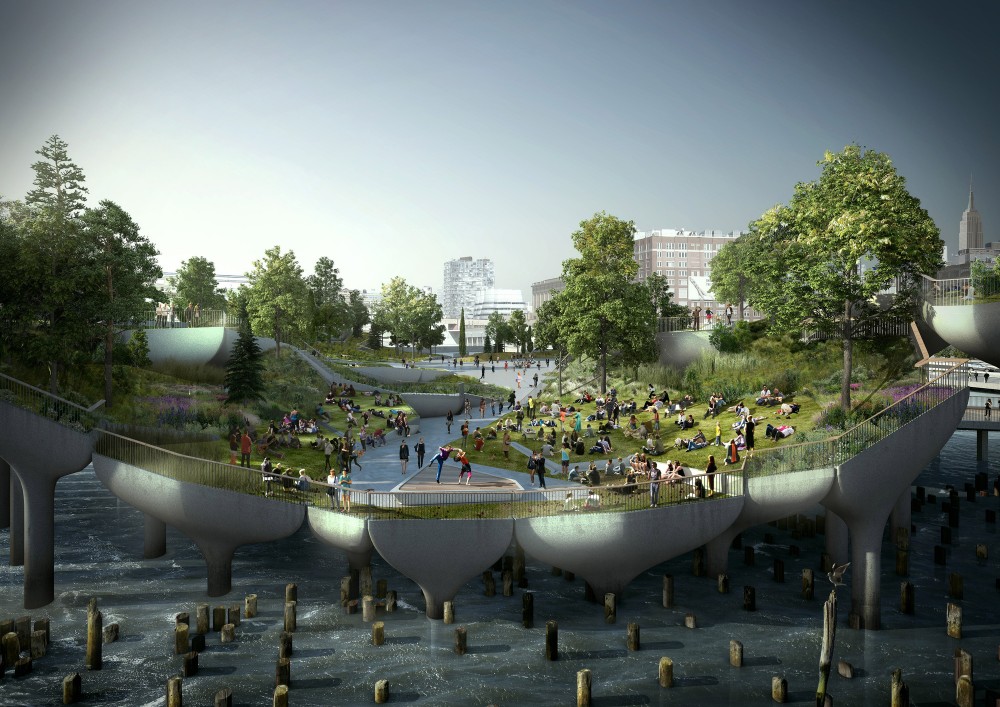 What was once the landing point for Titanic survivors on the Carpathia will soon become a refuge of another sort as a respite from the concrete jungle.

The “public/ private partnership” between the Hudson River Park Trust and the Diller-von Furstenberg Family Foundation will be part nature walk and part performance spaces. The space will be built 185 feet out over the river on 300+ concrete pilings that resemble golf tees. Through their family foundation, media mogul, Barry Diller, and famed fashion designer, Diane von Furstenberg, will contribute more than $100 million to the mega project. The city’s contribution will be around $17 million while the state will add another $18 million to create an esplanade leading up to the pier.

British architect Thomas Heatherwick will take care of the structural design and Signe Nielson will handle the landscape design. The art and performance activities will be overseen by a team of heavyweights in the arts that includes producer Scott Rudin. Diller and Rudin have agreed to the management of operations and programs for the first twenty years.

The new Pier 55 will replace the rundown and obsolete Pier 54, except for its iconic Cunard arch which will be artfully restored, with a 2.7 acre park of verdant spaces and engaging entertainment. There will be three performance areas, one with an 800 seat amphitheater, another small stage for an audience of about 250 and an open air performance space large enough for a couple thousand attendees.

Meandering paths and winding steps belie the parallelogram shape of the pier. The pier will be slanted with some pilings rising only 15 feet as required after Hurricane Sandy, to more than 70 feet above the water level. This sloping feature, in addition to providing interest by varying the elevations, is also an environmental consideration to provide more sunlight for the sea life under the pier.

The Lower West Side has experienced a boom of development in recent years. It has become a trendy area of the city with luxury apartments and professional headquarters, and the High Line Park, a converted elevated railway turned green space.

Mayor de Blasio and Governor Cuomo see the plan as a boon to the city and an opportunity to bring arts and open spaces to the general public, as well as a chance to revamp the unsightly Pier 54.

But the plan does have its opponents. There is an ongoing concern about private control of public spaces and the lack of public involvement in the planning process. Some other art and performance centers struggle for survival and fear a new space will further stretch their ability to entice attendance.

Many in the arts world counter that they simply do not have funds to bring forth this kind of opportunity themselves and vow that the park and “many” of the events will be free of charge.

There are still a few procedural hurdles to overcome for the project’s approval, but the largess of the private donation will be hard to refuse. Barring any glitches, construction could begin in 2016 with an expected completion three or four years later.