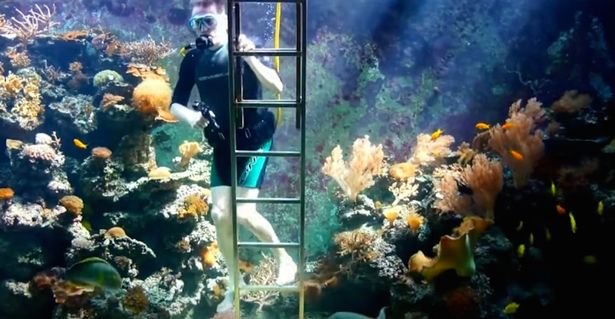 Eli Fruchter, an aquarium enthusiast from Haifa, Israel, has built a giant 30,000-liter aquarium in his living room. This aquarium is big enough to let him swim in it with the fish.

When Fruchter was just five or six years old, even though he lived in a tiny two-meter by two-meter area, he still had a small aquarium. About 10 or 12 years ago, he had a 1,000-gallon fish tank which broke accidentally and flooded his house. Then he decided to build another aquarium much bigger than that, and then a house around it.

Now Fruchter’s living room has an amazing 30,000-liter fish tank, having 150 tropical fish of 30 different species as well as a rainbow of corals. The tank provides the ideal conditions for the fish and the coral to grow. Eli’s filtration system is outstanding; there are four 25,000-liter/hour pumps for maintaining the water quality in the tank.

To provide perfect conditions for the reef and fish, Fruchter refreshes his aquarium water with 1,000 liters of fresh seawater every week.

Fruchter said, “The corals especially must have water that’s completely clean, and that’s very hard to get in a closed system. Most public aquariums are located near the ocean, and they just pump in clean water. It requires a lot of maintenance. A reef aquarium of this size you usually just find in places where they have a full-time staff. There aren’t too many crazy people around the world who will do something like this. You really need to like it a lot.”