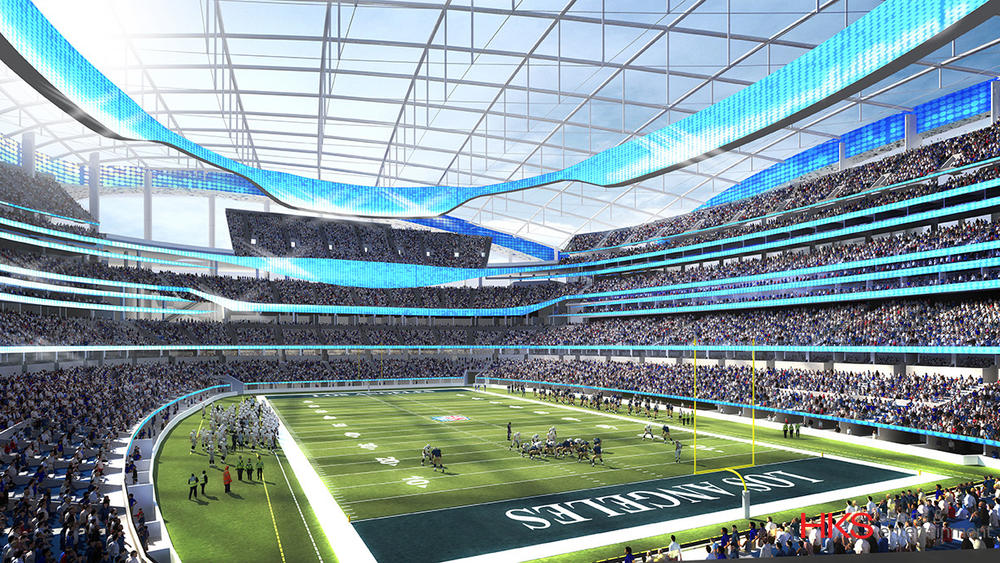 The St. Louis Rams have not been very successful since they moved to St. Louis from Los Angeles in 1994. The lowest point, perhaps, came in 2009 when the team went 1-15. But the team’s record of 30 wins against 67 losses since then, a rapidly aging stadium, and low fan turnout had stadium owner Stan Kroenke thinking long and hard about what to do with the team.

Then suddenly in 2014 Kroenke announced the purchase of a 38-acre parcel in Hollywood Hills, in Inglewood, California, adjacent to a 260-acre parcel owned by Stockbridge Capital Group. Kroenke, who had worked for the St. Louis Cardinals when they left St..Louis for Phoenix, Arizona, then announced plans to build an 80,000 seat stadium in Inglewood.

The stadium Stan Kroenke is planning is pictured above.

Naturally, St. Louis does not want to lose its second NFL franchise in the past two decades and so has made a commitment to build a $1 billion riverfront stadium for the Rams or for another NFL team. Following is a fly through of the proposed stadium.

Another New NFL Stadium for LA

Finally, at the same time, LA may be getting another stadium, a joint home for the Oakland Raiders and the San Diego Chargers. The following video discusses the proposed $2 billion stadium.