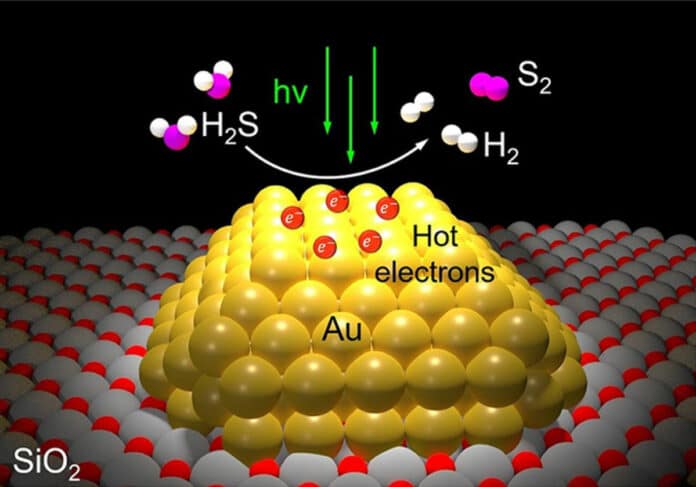 An illustration of the light-powered, one-step remediation process for hydrogen sulfide gas made possible by a gold photocatalyst created at Rice University ( Image Credit Rice University)

Researchers from Rice University have developed a method for petrochemical refineries to turn an expensive-to-treat by-product into hydrogen.

In the purification of natural gas, petroleum, and coal-coking operations, large amounts of hydrogen sulfide are produced as a byproduct. Hydrogen sulfide is very smelly and it stinks like rotten eggs. Not only that, but it is also toxic, corrosive, and flammable. So it is a very problematic job for them to deal with this stuff.

Thanks to Rice University researchers who have discovered an easy and profitable way to turn it into hydrogen.

Naomi Halas, the lead author of the study, said, “Hydrogen sulfide emissions can result in hefty fines for industry, but remediation is also very expensive,”

“The phrase ‘game-changer’ is overused, but in this case, it applies. Implementing plasmonic photocatalysis should be far less expensive than traditional remediation, and it has the added potential of transforming a costly burden into an increasingly valuable commodity.”

The one-step process can be completely powered by sunlight. As a result, where sunlight is available, the operating cost for this procedure is very less. However, it works just fine with artificial light as well. The team explained that you could roll it out even with its own low-powered LED lighting.

Halas said that this innovative technology with its low implementation costs and high efficiency could also prove to be an economical way of cleaning up nonindustrial hydrogen sulfide from sources like sewer gas and animal wastes.

“Given that it requires only visible light and no external heating, the process should be relatively straightforward to scale up using renewable solar energy or highly efficient solid-state LED lighting,” she said.

Spanish ACCIONA to Develop a Mega Wind Project in Australia