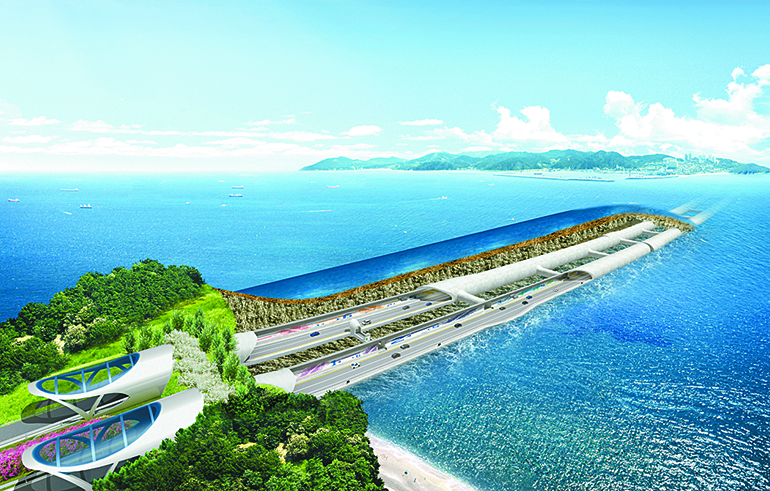 South Korea’s longest underwater tunnel stretching for 6.93 kilometers (4.3 miles) is scheduled to open on December 1, 2021, so the construction has been completed and only the final tests remain before it becomes accessible to the public.

The new tunnel will link Boryeong and Taean with two separate tubes that will accommodate two-way traffic, and is expected to provide a new channel for tourism on the west coast. The new route will save Boryeong citizens and everybody else in the southern part of the island roughly 60 km. In terms of time, it will cut the travel duration from 90 minutes down to just 10 minutes.

The tunnel reaches a maximum depth of 80 meters under the surface of the sea, so building it was nothing short of challenging. The construction was undertaken by Hyundai Engineering, which developed a new grouting technology specifically for this project, calling it Intelligent Multi Grouting (IMG).

IMG basically controls the pressure and quantity of seawater in a highly consistent manner. This is required to reach an excellent quality result while also finishing the grouting process in record times since it’s capable of working on multiple locations simultaneously.

Standard grouting methods have cracking, color tint, and fine gravel imbalance problems when a lot of water is involved. IMG gives workers maximum control over the water flow, so all these problems can be mitigated while construction times are cut by 40%.

The thickness of the concrete on the outer shell is over 40 cm than that of ground tunnels, while the max pressure that it was designed to sustain reaches a whopping 40 MPa. Obviously, Hyundai’s engineers run many computer simulations to determine the requirements on that front.

The Koreans guarantee the safety of the tunnels during strong typhoons, heavy snow, or rough waves, and have developed safeguards to deal with emergencies such as seawater flooding at any point of the tunnel.