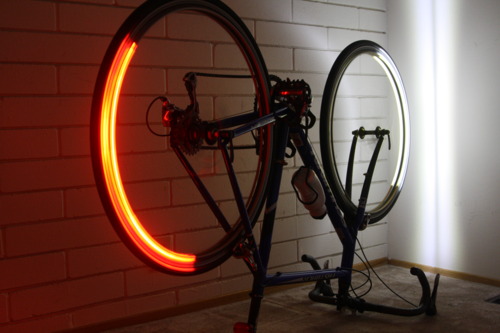 Staying safe on your bicycle on public roads is a must, particularly so at night. While your bike should be kitted out with a front light and reflectors on the back as well as the cyclists themselves wearing a hi-visibility vest of some sort, it may not be enough. This is where Revolights comes in. Creators Kent Frankovich and Adam Pettler explain that the simple idea came from wanting stronger lighting up of the road in front of cyclists as well as increasing visibility to other road users. The LED lights are quite straightforward and are mounted to the wheels, just below the brake callipers. While the bike is static, the spokes of the wheel are lit all the way around but when revolving and cycling the lights stay focussed on one spot.

The front wheel shines a white light out the front for the cyclist’s view while the back wheel will illuminate in orangey red to draw the attention of a car or other cyclist coming from behind. Not only that, but the lights will also increase visibility from the side too, making for an altogether safer lighting and visibility set-up for cyclists.

The lights are powered

by a small USB rechargeable polymer lithium-ion battery and have a battery life of four hours, and the lights are water resistant for cycling in wet conditions.

After various different prototypes that were either inefficient or a little too clunky to be added to the wheels, Frankovich and Pettler have touched on the prototype that’s right for the project, which is still on going.