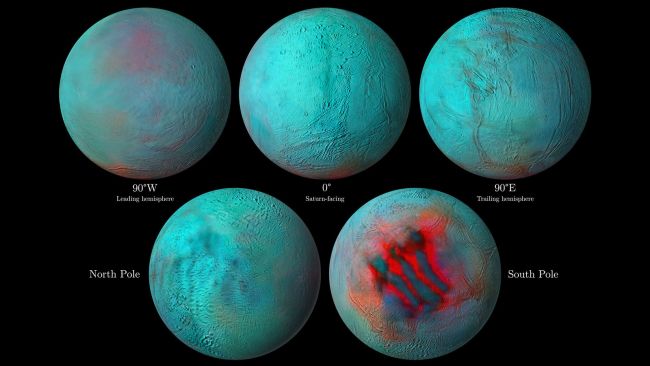 The images by NASA’s Cassini spacecraft are the most detailed global infrared views that have ever been produced. NASA’s Cassini was sent to study the planet Saturn and its system, including its rings and natural satellites. Scientists collected data by Cassini during its 13 years of exploring the Saturn system.

The hope of life on Enceladus:

Saturn’s icy moon Enceladus is one of the leading locations in the search for possible life. Scientists examined detailed infrared images of Enceladus. They found the strong evidence that the moon’s northern hemisphere has been resurfaced with ice. This evidence could be great news for the possibility of life on Enceladus.

The data was created using Visible and Infrared Mapping Spectrometer (VIMS), onboard the Cassini.

Gabriel Tobie, VIMS scientist, said, “The infrared shows us that the surface of the south pole is young, which is not a surprise because we knew about the jets that blast icy material there,”

“Now, thanks to these infrared eyes, you can go back in time and say that one large region in the northern hemisphere appears also young and was probably active not that long ago, in geologic timelines.”

How Technology is Reshaping the Fitness Industry
‘Growing Power’ Produces 1 MILLION Pounds of Food on 3 Acres of Land!

In a Major Breakthrough, Scientists Make Leukemia Cells Kill Each Other