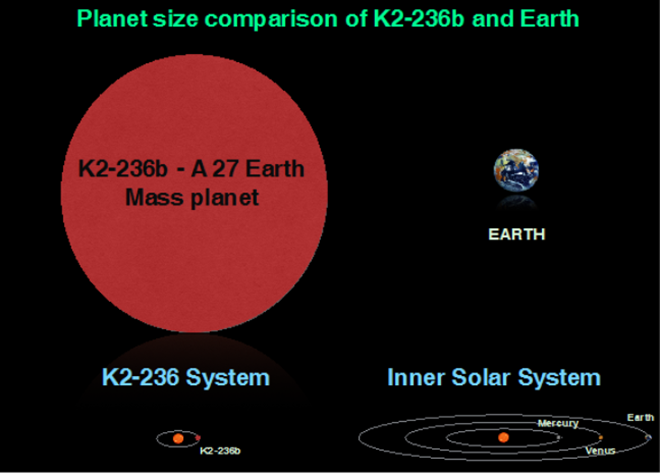 Indian researchers at the Physical Research Laboratory in Ahmedabad have discovered a new planet revolving around its host star approximately 600 light years away from Earth.

The newly discovered planet has been named EPIC 211945201b or K2-236b.  It is 27 times the mass of Earth and it completes one revolution around its sun-like star in roughly 19.5 days. In comparison to our Earth, it is estimated to be more than seven times closer to its star. The surface temperature of the planet was found to be about 600 degrees Celsius.

This discovery could help scientists understand the formation mechanism of super-Neptune or sub-Saturn planets that are very close to their host star.

Scientists made this discovery by measuring the mass of the planet using the indigenously designed PRL Advance Radial-velocity Abu-sky Search (PARAS) spectrograph, integrated with a 1.2-meter telescope at PRL’s Gurushikhar Observatory in Mount Abu, India.

India is becoming a leading player in the space industry

With this latest discovery, India has joined the elite league of countries that are capable of discovering exoplanets.