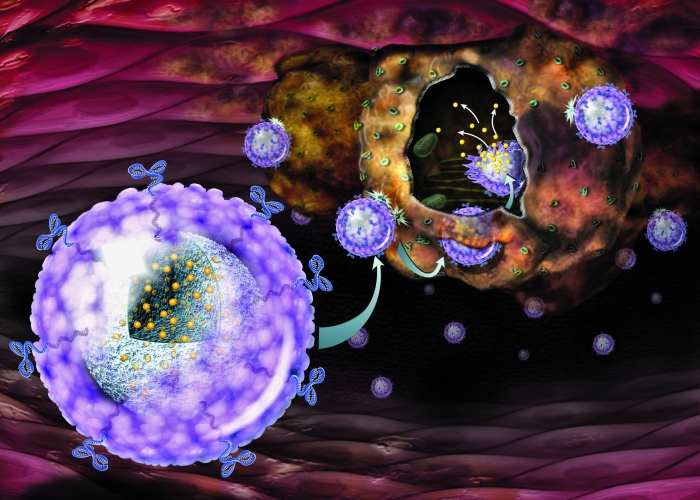 Spontaneous self-organization of colonies of living organisms is a fascinating and baffling concept. Think about flocks of birds that shift direction in a simultaneous dance, or schools of fish that split and regroup as if thinking with one “group mind.” Even lowly bacteria have a “quorum sensing” mechanism. But could it be possible for inanimate objects to colonize in response to external factors?

Nanoparticles don’t follow the same laws as particles in the everyday world. A major challenge in nanotechnology is getting particles that are “a thousand times smaller than a grain of sand” to behave according to some standard organizing principles. A team from University of Michigan set out to find a simplified procedure of coaxing particles to self-assemble. They created a computer simulation to test various methods of stimulation.  What their simulation showed is that stimulating the nanoparticles to spin caused them to self-assemble into specific groups.

This builds on recent understanding that providing a motion-stimulating energy to particles causes them to influence each other into forming groups. And a team from NYU recently showed that crystal groups responded to violet-blue light with “self-propulsion.” If this had been a matter of simple attraction, the particles would have amassed, but the crystalline groups continued to move around and collide and reform into new colonies.

Once the “colony” grew to about 35 particles, the edge particles would break away to organize another crystal group. When the light was turned off, the crystals fell apart within 10 seconds and the particles resumed their state of random Brownian motion. This ability to switch the self-organization of particles on and off on demand can have implications for “smart” materials that can even be reversed and reconfigured under light stimulation.

The U-M group wanted to see what would occur if all the individual nanoparticles were set in motion, either clockwise or counterclockwise. It turns out that the spinning causes the particles to form crystal groups based on rotation direction. Think of pinwheels rotating on puffs of air. As the blades of the spinners catch the blades of other same-directional spinners (and their blades meet and grab at opposing direction) they self-organize into crystal groups. As the two counter-spinning groups divide into “tribes” a corridor is formed between them that allows non-spinning particles to be moved along without being co-opted into one of the spinner groups. The team sees this as a potential for the development of a “nanopump” delivery system to transport materials through a devise.

But one of the most intriguing questions that come out of this self-organizing phenomenon is whether this represents how life itself may have formed from the chemical stew. These crystals developed a self-organizing dynamic that was unexpected.  Even though this was done as a simulation, there is every reason to believe that the rotated particles could form into “living” three dimensional crystals.

Many indigenous peoples believe that rocks are alive and hold the “spirit of creation” that animate objects enjoy. I suppose it all depends on how you define “being alive.” Creating order from chaos is foundational to the origins of life on Earth. When we break it all down, what we have are parts from the Periodic Table.  It’s the combining and organizing and reorganizing that makes it “real,” that makes it actually “matter.”