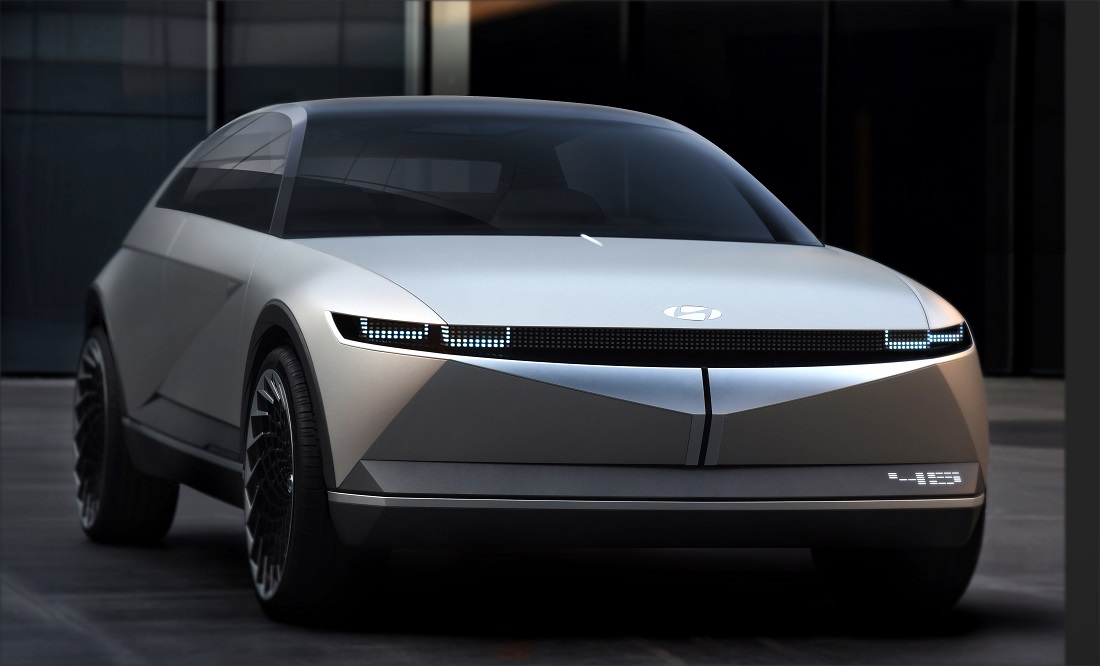 You might not think of Hyundai first when you hear the term electric vehicle. You should, though. The Korean manufacturer, together with its sister company, Kia, already has some excellent battery-electric vehicles in its portfolio. Hyundai’s electric cars provide superior range and performance at much lower price points than the competition.

Hyundai doesn’t sit on its laurels, though. Despite the successful push of electric cars, the company prepares to make an even more significant effort, which might give the competition headaches.  According to Hyundai’s head of design, the company develops three new EV’s in the next few years, starting with the quirky and retro-styled crossover called the “45” in 2021.

The crossover will probably go head to head with the Tesla Model Y, but also Ford’s electric crossover called the Mustang Mach-E. Interestingly, the name of the car references the 45 years since the Korean company launched its first concept car, the sports-coupe Pony. Moreover, the design of the Hyundai 45 is said to draw inspiration from that concept, which itself borrowed design cues from 1920s aircraft.

Next in line is a luxurious electric sedan that will probably compete with the Tesla Model 3. The model will be based on the futuristic Prophecy concept.

The car will be designed with aerodynamic efficiency in mind, in order to improve the range. Thanks to the large wheelbase, the Prophecy should offer the passengers ample room inside the cabin.

The third model that Hyundai plans will be based on the company’s Electric Global Modular Platform (E-GMP).

According to Hyundai, this model will be the big one, since using the new architecture will open many new possibilities for engineers.

“The 45 is more SUV-style, and the Prophecy is the future [saloon] proposal. The third one is more of the space concept: the big one.” – said SangYup Lee, head of design at Hyundai. “The new EV architecture gives us a long wheelbase and a flat floor, and we’re experimenting with unique USPs and how we will stretch it.”

Tesla Announces Expansion of “Adrenaline Like” Battery Supercharger Network, A Game Changer For The Industry (Video)
50 Days Before The World Cup: See How Brazil’s New Soccer Venues Are Coming Along…
Get Your Beauty Sleep with Blasts of Hot or Cool Air into Your Bed